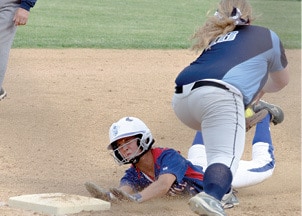 Freshman Libby Ahlers slides under the tag into third base during the Hornettes conference win over Pinckneyville on April 29.

The Nashville Hornettes softball team is playing better than they have all season. After Monday night's win, the Hornettes have now won 10 out of 13. The Hornettes went 3-1 this past week, getting big wins over Breese Central, Pinckneyville, and Okawville. Their only loss of the week, came in a 12 inning game against Belleville West. The Hornettes record currently stands at 18-8 overall, and 7-1 in conference play.

Deidra Holzhauer pitched 11 2/3 innings for Nashville in the game giving up seven runs, six earned, while walking one batter and striking out six. At the plate, Holzhauer led the team with two RBIs in the game. Mackenzie McFeron, and Brooke Burcham each had two hits for Nashville to go along with an RBI. Karly Stanoski and Libby Ahlers added the other two RBIs for the Hornettes. Paige Kasten, Jordan Stiegman, and Alli Liske each had two hits for Nashville while Sophie Heck had one hit in the loss.

The Hornettes were back in action April 28 against Okawville. The Hornettes took the lead in the first inning, and that was all Liske would need on the mound, as Liske pitched a two hit shut out giving Nashville a 5-0 win. Liske would strike out a season-high 10 batters in the game. At the plate, Nashville was led by Kasten and Liske each had three hits and a RBI in the win. Holzhauer went 2-3 in the game with two doubles and two RBIs for Nashville, while McFeron added three hits, two steals and one run scored. Burcham finished with one RBI, a run scored and a triple in the win while Ahlers finished with one run scored, two walks and two steals.

The Hornettes continued a busy week with a conference showdown against the Pinckneyville Panthers. A pitchers duel throughout, the Hornettes got timely hitting from Stanowski on their way to a 2-1 win. With the game tied at 0 in the fifth, Stanowski crushed a long home run over the left field fence to give Nashville the lead. Then in the seventh, after Pinckneyville tied the game at one, Stanowski doubled home Burcham giving Nashville a 2-1 lead. On the mound, Holzhauer made the lead stick as she made short work of Pinckneyville in the bottom of the inning. Holzhauer finished the game giving up only one run on four hits, while striking out four.

After the game, coach Shaun Renth, talked about how big the win was. “All conference wins are big, and its really big when you can beat Pinckneyville, they're a rival of ours and they're in the regional so that's huge. They've only lost to Carterville twice, so that's huge.”

Coming off the win over Pinckneyville, the Hornettes had another big game as they traveled to take on Breese Central on May 2. A close game throughout the first four innings, Nashville broke out for five runs in the fifth and put the game away, as they won 9-4. Nashville got another good performance on the mound from Holzhauer, as she pitched all seven innings, giving up just three earned runs, striking out three batters. At the plate, the big blow of the game came off the bat of Burcham. With two batters on in the fifth, Burcham crushed a three run home run to put the Hornettes ahead for good. Burcham would finish the game 2-4 with a run, a home run, and three RBIs. McFeron continued her great season going 2-4 with two runs scored, a RBI, and 3 steals in the game. Holzhauer also finished 2-4 with a run, and a RBI. Stiegman, Ahlers each had a RBI on a hit in the game, while Heck finished with a triple and a run scored for Nashville. Stanowski finished with a hit and a walk, while Kasten and Lane had the other two runs scored for Nashville.