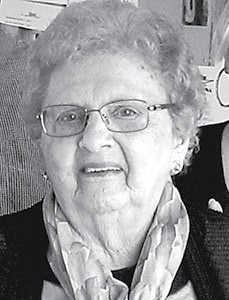 She was born on October 22, 1926 in Hoffman, the daughter of William and Emma Brandhorst Tyberendt. She married Reinhold A. Maschhoff on May 6, 1950 in Hoffman and he passed away on August 20, 2006.

Alvera worked at the candy factory in Centralia prior to her marriage. After marriage, she was a farm wife. She was a member of St. John Lutheran Church in New Minden where she was active in LWML and the ladies aid. She was a volunteer at the New Minden Braille Center, Friendship Manor Health Center and Washington County Hospital. She enjoyed gardening, quilting, crocheting and spending time with her children, grandchildren and great-grandchildren.

Funeral services will be held at 11:00 a.m. on Monday, May 9, 2016 at St. John Lutheran Church in New Minden with Rev. Timothy Mueller officiating. Burial will follow in the church cemetery. Friends may call from 5:00 to 8:00 p.m. on Sunday at the church and one hour prior to services. Memorial contributions may be made to St. John Lutheran Church. Styninger Funeral Home in Nashville is in charge of arrangements.