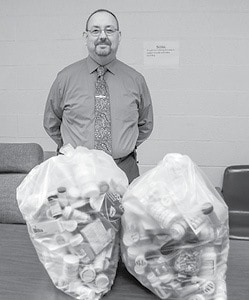 Citizens brought in enough drugs and medications to fill up two garbage bags, each of which weighed about 20 pounds, said Detective Tommy Moss.

Reasons to dispose of the drugs in this manner include getting rid of expired or unneeded drugs, keeping drugs out of the hands of children or other family members, and keeping disposed of drugs out of rivers, lakes and groundwater.

Most of the drugs disposed of were various pills and other prescriptions.

The drugs will be picked up by the Drug Enforcement Agency, who will then dispose of them by incineration.

The next takeback day being put on by the Sheriff’s Department will likely be in September, though an exact date has not yet been set.

“They don’t need to wait for the takeback day,” Moss said, saying that the Sheriff’s Department will except drugs for safe disposal any time.