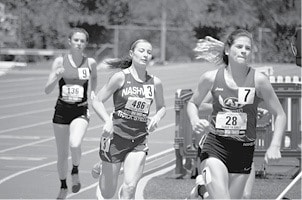 The Nashville Hornettes track team sent nine athletes to Charleston this past week to compete in the Class 1A State Track Meet. The Hornettes advanced athletes in eight different events. Competing was Kylie Kozuszek in the pole vault, Allyson Grabowski in the 800, Janie Holle and Abby Kroener in the discus, Grace Maschhoff in the 1600m run, Brittnie Bartling in the 3200m run, the 4X800 team of Grabowski, Maschhoff, Kozuszek, and Taylor Cook, and the 4X400 team of Grabowski, Kozuszek, Cook, and Jadah Heidel. The Hornettes won their sectional for the first time since 2013.

After dominating the field at Sectionals, the Hornettes struggled at the state meet. The Hornettes faced some of the top competitors in the state, and Brittnie Bartling was the only Hornettes track athlete competing on Saturday. Emily Harper was placed in the top flight in the shot put, along with perennial state champion Kathleen Young, who broke the Class 1A record during the prelims. Harper's best throw of the day, was 35-01.75.

In the discus event, the Hornettes had two athletes qualify for state. Janie Holle and Abby Kroener finished 1-2 in sectionals, advancing to the state prelims. Holle finished third in her flight with a throw of 104-06, but missed out on qualifying for the finals. Abby Kroener was placed in the top flight in the discus, and finished in the bottom half of the flight with a throw of 109-10.

In the pole vault, Kylie Kozuszek could not get over the opening height, which was 8-6, a full two feet over the height she qualified with at Sectionals.

In the 1600m run, Maschhoff was placed in the second heat with eventual state champion Anna Sophia Keller from Effingham (St. Anthony). Maschhoff did not run her best race as she finished at the bottom of her heat. Keller blew away the competition with a time of 4:55.62.

The Hornettes final event of the prelims was the 4X400m relay. Cook, Kozuszek, Heidel, and Grabowski were in the first heat of the 4X400. The Hornettes ran a few seconds off their sectional pace, but still managed a fifth place finish, just ahead of conference rival Anna-Jonesboro. Although they finished fifth in their heat, Nashville was not able to advance.

Only one event did not have prelims, the 3200m run, which meant Bartling was locked into a spot on the final day of the track meet. Bartling was one of 28 runners that earned a place in the final of the 3200m run. Bartling finished in 26th place with a time of 13:10.67. Keller, who won the state championship in the mile, also crossed the line first in the two-mile with a time of 10:32.16

One state championship was awarded to a member of the Southern Illinois River to River Conference, as Sophie Keith of Pinckneyville crossed the line in a time of 57.97 to win the 400m dash championship crown. Keith would also finish seventh in the 200 meter dash with a time of 26.28. 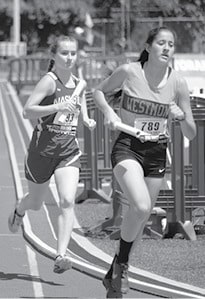 Allyson Grabowski stays with the pack during the 800m run at the Class 1A State Track Meet in Charleston. 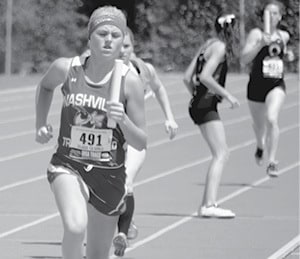 TOP: Kylie Kozuszek gets the handoff from Grace Machhoff and was off to the races trying to chase down the other runners during the 4X800m relay at the Class 1A State Track Prelims on May 19. RIGHT: William Wyciskalla sprints to the finish during the Class 1A Sectionals, held at NCHS.