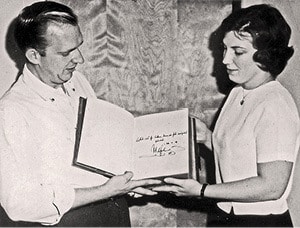 Let’s just start this out by saying, you will not believe who signed it!

Irvington historian and contributor to The Nashville News (both past and current) Ralph McTall contacted us with information about last week’s Classic Photo, which depicted two people holding up a book.

The people in this 1965 photo are Rev. Kenneth Knobloch and his wife Jean of Friedens United Church of Christ in Irvington– pretty normal, right? The book is what is particularly unique about this photo, and who originally sent the book, a Bible, to Irvington.

The picture was taken on the 75th anniversary of the church and this particular Bible, owing to its rarity and uniqueness, was only removed from the safe where it was stored for momentous occasions. The Bible was an inscribed edition, given to the church by Rev. Rauch, who was called to serve in Irvington in 1913 and stayed through 1922.

Before coming to Irvington though, Rauch was a minister in Germany, where one of his parishioners, and his friends, was none other than Kaiser Wilhelm II. Yes, that Kaiser Wilhelm.

The Kaiser sent the inscribed Bible to his friend Rauch sometime after his arrival but due to the happenings in Europe around that time, World War I, which the Kaiser himself played no small part in, the book was, according to McTall, “lost in the mail,” and did not arrive in Irvington until 1919.

So a German Dictator who the United States would eventually go to war with sent an inscribed Bible to his friend, the minister in Irvington, Illinois.

So, next time someone says that local history is boring, be sure to tell them about this.