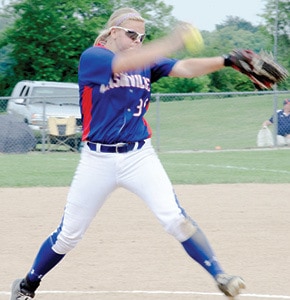 An up and down season for Nashville came to an end this past week with a 10-2 loss to the Carmi-White County Lady Bulldogs. The loss ended a streak of three straight Sectional Championship appearances for the Hornettes, all of which were against Carterville. A close game throught the first four innings, saw the Lady Bulldogs plate seven runs in the fifth to take control. The Hornettes offense could not solve Carmi-White County's pitcher, and could not muster a comeback.

Carmi-White County got the scoring started in the ballgame as three of the first four batters reached base via a single. Mackenzie McFeron would make a great play at short, cutting down the runner at home, to keep the game scoreless. But with the bases still loaded, Hornettes pitcher Deidra Holzhauer hit the next batter to give Carmi-White County a one run lead. However Carmi-White County would leave the bases loaded in the inning.

The Hornettes would also get off to a fast start in the contest, as McFeron singled on a bunt to open up the game. McFeron would move to second on a wild pitch, and come around to score with two outs in the inning, when Karly Stanowski reached via an error to tie the game at one. The game would stay tied until the third, when Nashville clawed out their second run of the game. Again McFeron singled to open up the inning, and reached second on an error by the first baseman. Again Stanowski would come through with two outs, as this time she notched a RBI single, to put the Hornettes ahead.

The lead would be short lived for Nashville, as Carmi-White County would come back right away to tie the game in the fourth, as two of the first three batters of the inning ripped doubles, but Nashville was able to get out of the inning with the game tied, as Holzhauer was able to get the next to batters to ground out avoiding futher damage. After holding the Hornettes scoreless in the bottom of the fourth, Carmi-White County took control in the fifth. The Lady Bulldogs would send eleven batters to the plate, scoring seven runs. The Lady Bulldogs would notch six hits, one of which was a home run in the inning. The Lady Bulldogs would add a run in the sixth, on their way to a 10-2 victory.

Holzhauer was on the mound for Nashville in her final game as a Hornette. Holzhauer pitched all seven innings for Nashville giving up 10 runs, only five of which were earned, with two walks and three strikeouts. Coach Shaun Renth said of Holzhauer's season, “better than we could've expected”.

At the plate the Hornettes were led by McFeron, who finished as the only Hornettes player with multiple hits. McFeron finished 2-3 and scored the only two runs of the game for Nashville. Stanowski finished the game 1-3 with a RBI. Jordan Stiegman and Holzhauer had the lone other hits for Nashville. Paige Kasten did not reach base but had a sacrifice.

The Hornettes finished the year with a record of 23-12. Coming off of a state championship in 2015, the Hornettes fielded a young team, as they were forced to replace two all-state players in Jordi Harre, and Maci Ingram as well as team captains Emily Thompson, and Daley Buchanon. This season, the Hornettes starting lineup featured just one senior, Holzhauer, one junior in Alli Liske, five sophomores, and two freshmen. The Hornettes also went through extensive changes on the coaching staff this season, as only two coaches returnd from last year's squad. Dempsey Witte, Wayne Harre, and Bethany McQuiston all stepped aside from last years team, leaving only Patrick Weathers and Charlie Heck from last year's staff.This season was the first year for head coach Renth, as well as assistant coach and former Hornette player Breanne Pelker. Even with the coaching staff changes, the young core of the team came through behind the leadership of Holzhauer and Liske. The Hornettes finished the season with a second place finish in the NIT, a 7-2 conference record, and won their sixth straight regional championship.