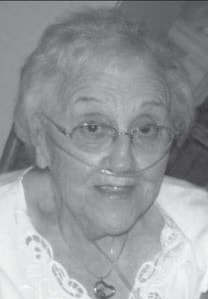 Mrs. Amanda Moeller of Nashville, IL, departed this life at Washington County Hospital in Nashville on Friday, June 10, 2016 at 11:05 AM. She had attained the age of 91 years, 11 months and 4 days.

Amanda was a self-employed cake designer and also worked as a school janitor for over 25 years. She was a member of St. Peter’s United Church of Christ in Stone Church, IL, where she was the previous Sunday school superintendent and was a member of the Women’s Guild. Amanda was a 4-H leader, and enjoyed cooking, dancing and playing with her great-grandchildren.

Left to mourn her passing are her two daughters, JoAnn Moeller of Nashville, IL, and Dianne Hummert and husband Leroy of Venedy, IL; two grandchildren, Kristine Wolf and husband Aaron and Shannan Haacke and husband Scott; four great-grandchildren, Maci and Kaylee Wolf and Lauren and Taylor Haacke; a sister, Thelma Borresen of Witchita, KS, nieces, nephews, other relatives and friends.

She was preceded in death by her parents, husband, a brother, Lawrence Jasper and a sister, Martha Jasper.

Funeral services were held at St. Peter’s United Church of Christ in Stone Church, IL on Tuesday, June 14 at 11 AM with Pastor Cherie Stolze officiating and with interment that followed in the church cemetery.

Should friends desire, memorials may be made to the St. Peter’s United Church of Christ in Stone Church, IL and will be accepted by the Campagna Funeral Home.