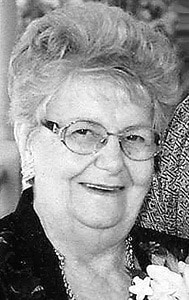 Mrs. Verna Lou Heckert of Venedy, departed this life at Washington County Hospital in Nashville, on Wednesday, June 15, 2016 at 6:50 AM. She had attained the age of 82 years, 3 months and 9 days.

Mrs. Heckert was born on March 6, 1934 in rural Okawville, the daughter of Henry “Harry” and Wilhelmina “Minnie” (Klasing) Borrenpohl. She was united in marriage to Wayne Heckert on September 12, 1953 at Immanuel Lutheran Church in Okawville, and he survives her passing.

Verna was a homemaker and also drove a school bus for several years. She was a member of the Immanuel Lutheran Church in Okawville. Verna enjoyed cooking and loved her family.

Funeral services were held at Immanuel Lutheran Church in Okawville, on Saturday, June 18, 2016 with Pastor Eric Wood officiating and with interment following in the church cemetery.

Should friends desire, memorials may be made to the SAFE Fund or the WWCUD #10 Scholarship Foundation and will be accepted by the Campagna Funeral Home.