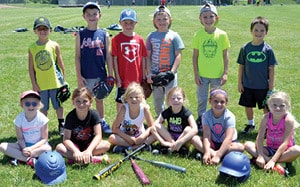 The Nashville High School baseball team hosted baseball camps for kids. The camp was for all grades ranging from Kindergarten to eighth grade.

The Little Sluggers camp, for kindergarten to third graders, was held June 6, 7, and 8.

The fourth through ninth grade camp was held June 6 through June 9.