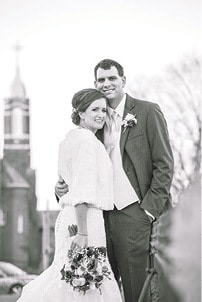 A gorgeous day on February 6, 2016 – Rachel Noelle Unverfehrt became the bride of Clayton John Kincaid at half-past one in the afternoon officiated by Pastor Joshua Theilen at Trinity Lutheran Church, Hoyleton.

Rachel is the daughter of Larry and Kathy Unverfehrt of Hoyleton, and Clay is the son of Steven and Debra Kincaid of Louisville.

Rachel is the granddaughter of Mr. Gus Unverfehrt of Hoyleton and the late Mrs. Irene Unverfehrt, and the Late Mr. and Mrs. Wilbert and Violet Sachtleben.

Clay’s grandparents are Mr. and Mrs. Fred and Marilyn Kincaid of Louisville, and Mrs. Pauline Denning of Mt. Vernon, Ind., and the Late Andy Denning.

The Groom chose his brother, Mr. Collin Kincaid as his Best Man. The groomsmen were Mr. Levi Bailey, friend of the groom; Mr. Preston Greenwood, friend of the groom; Mr. Tyler Unverfehrt, brother of the bride; Mr. Matthew Unverfehrt, brother of the bride; and Mr. Nathan Beckmann, brother-in-law of the bride. The groomsmen wore gray tuxedos. The ringbearers were Master Grant Larson Unverfehrt, nephew of the bride and Master Dade Beckmann, nephew and Godchild of the bride. Grant carried a pillow made up of the Bride’s Grandpa Sachtleben’s neckties. Dade was ushered down the aisle by his dad in a pullcart that was the Bride’s Grandma Sachtleben’s when she was a little girl back in 1924. The ringbearers were decked out in black pants, gray vests, purple shirts & ties.

A Remembrance Table was adorned with pictures of loved ones who have passed: Mr. Wilbert & Mrs. Violet Sachtleben, grandparents of the bride; Mrs. Irene Unverfehrt, grandmother of the bride; Mr. Andy Denning, grandfather of the groom; and Mr. Elmer Wittemeyer, like a “Grandfather” to the bride. Organist was Lori Brammeier, friend of the Bride. Rachel’s aunt Diane Speare is her other Godmother, who was unable to attend.

The Reception was held at Gus C. Unverfehrt Farm Supply, Inc. of Rural Hoyleton. The 80’x 130’ building was transformed from a building normally housing Service Trucks to an unbelievable beautifully decorated reception hall. The theme was vintage-country in Purple and Gold. The backdrop behind the wedding party table was sheer tulle and gathered with purple bows. A lighted tulle drop ceiling hung over the dance floor. Guest tables were decorated with flowers and handmade vintage centerpieces.

Clay is involved in the family farm and trucking business along with his father & grandfather in Louisville.

After a honeymoon to Cancun, Rachel and Clay now reside at 2335 Kinmundy Road, Louisville.