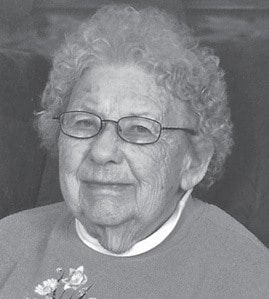 Mrs. Dorothy Nadolski of Ashley, IL, departed this life at Friendship Manor Healthcare Center in Nashville, IL on Tuesday, June 28, 2016 at 9:25 PM. She had attained the age of 90 years, 4 months and 20 days.

Dorothy was born on February 8, 1926 in Waltonville, IL, the daughter of Charles and Ruth (Pittman) Panzier. She was united in marriage to Sylvester Nadolski on April 21, 1945 at St. Michael Catholic Church in Radom and he preceded her in death on November 26, 2005.

Dorothy was a homemaker and a faithful member of St. Michael Catholic Church in Radom, IL.

In addition to her parents and husband, she was preceded in death by five brothers, Theodore, Ernest, Virgil, Wilburn and Johnny; two sisters, Helen Felty and Maxine Lenington; a grandson, Charles Nadolski and a great granddaughter, Jada Hopfinger.

Mass of Christian burial was held at St. Michael Catholic Church in Radom, IL on Saturday, July 2, 2016 at 10 AM with Fr. Oliver Nwachukwu and Fr. Andy Knopik officiating with interment followed in the church cemetery.

Should friends desire, mass offerings or memorials may be made to the Lions Club Sight Programs or to the family of Dorothy Nadolski and will be accepted by the Campagna Funeral Home.