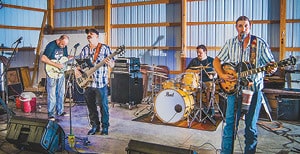 Live musical entertainment was on tap on the night of Wednesday, July 13, when the Threshermen played at the Washington County Fair as part of the Washington County Arts Council’s free summer concert series. The band included, FROM LEFT, Nathan Rittenhouse, guitar, Sean Clark, bass, Josh Curl, drums, and Steve Hicks, guitar. The final concert of the series will be this Thursday, July 14, when DC Cusanelli, the one man band, will play at Memorial Park in Nashville from 6 to 8 p.m.