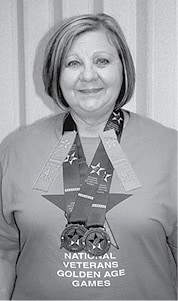 In June of 2012, Francis Lyle Auld, a Korean Veteran formally of Oakdale who then moved to Poplar Bluff with daughter and her husband, brought home two Silver and one Bronze medals in the National Veterans Golden Age Games that were held in St. Louis that year.

Auld was registered the following year for Buffalo, N.Y., and passed away before the games. He was hoping to hang on so his Father/Daughter Team could compete together, when Mary would reach her Golden Age goal.

Mary Jayne Bader graduated from the Nashville High School in 1977 and has 21 years in the Military and currently works at the John J. Pershing Va. Medical Center in Poplar Bluff.

She enrolled in the 2016 Golden Age Games that were held July 10—14 in Detroit, Mich. Enrollments in the games were up 40-percent because more Veterans are taking charge of their own health and doing something about it.

Mary said it wasn’t just the competition that was there at the Games it was the comeradery with the other Veterans and the uplifting they did for each other.

To see a 73-year-old Vietnam Female Veteran doing the ½ mile pulling her oxygen tank behind her on the track and everyone standing and cheering her on to the finish line; the 94-year-old WW2/Korean Veteran swim the 50 meter and run the 1 mile was totally awesome. Mary told him, “he was her hero” She asked him how he stays in shape, he said he exercises 30 minutes a day, 7 days a week in water only. He also swims 3 miles a day, “just not all at once,” he said laughing.

Mary has concluded that her whole take on the Veterans games is that “your Health is Priceless” and you better take care of that body.

More information on the VA Games:

Open to Veterans Receiving VA Health Care Since 2004, the National Veterans Golden Age Games have been a qualifier for the National Senior Games, a member of the U.S. Olympic Committee. Through this partnership, gold, silver and bronze medalists in certain events have the opportunity to compete further among America’s elite senior athletes. The Games are open to all U.S. military Veterans age 55 or older who are currently receiving care at a VA medical facility. For more information about the National Veterans Golden Age Games and other VA national rehabilitation programs, visit www.veteransgoldenagegames.va.gov. 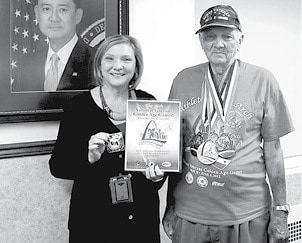 In 2012, Francis Auld, LEFT, with the games’ director, formerly of Oakdale competed in the National Veterans Golden Age Games. This year, his daughter, Mary Bader, ABOVE, competed in the games.