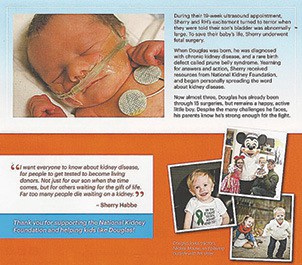 Douglas Habbe, of Nashville, is featured on a fundraising brochure from the National Kidney Foundation.

Editor’s Note: Douglas Habbe, 2 ½ years old, of Nashville, didn’t have an easy start to life. Before he was even born, Douglas, son of R.H. and Sherry Habbe, had already gone through a medical procedure that would make a grown-up, let alone a child, scared. Since then, he’s been through 15 more procedures.

Having gone through all that, Douglas’ photo is being used on a brochure that is part of a national campaign for donation by the National Kidney Foundation.

While Douglas has been through a lot already, his road ahead will remain tough– something you would not guess from seeing the smile on his face.

Douglas’ mother, Sherry, wrote more to share with The Nashville News’ readers just what Douglas has gone through:

When you look at Douglas you see a happy blue eyed boy that loves ice cream, tractors, trucks, Mickey Mouse, playing with his big sister, and that is surrounded by a family that loves him. When you look at him you would never know that those beautiful blue eyes have a secret; he has an invisible disability and has been through more in his two years of life than most adults.

We went in for our routine ultrasound at 19 weeks gestation….the pregnancy had been completely normal, no reason to suspect anything was wrong with the baby. We were excited to find out if we were having a boy or a girl. Our daughter wanted a sister, daddy wanted a brother. I honestly would be happy either way (but secretly was hoping for a girl to get more use out of all my girl stuff)

When it was time for our ultrasound, it began like any other ultrasound would but quickly took a turn for the worse when the technician ran from the room to find our doctor.

None of the doctors at the OB clinic I was going to had seen an image like ours and no one could tell me what our baby had or what was wrong with the baby. We had to go home on a Friday night and wait all weekend until Monday morning before we could meet with a specialists

Monday morning I called the St. Louis Fetal Care Institute at SSM Cardinal Glennon and was set up with an appointment with Dr. Vlastos that same day

Dr. Vlastos, or Dr. V as his patients call him, diagnosed our baby with bladder outlet obstruction or lower urinary tract obstruction (LUTO). This is a blockage in the fetus’ bladder that restricts or prevents the flow of urine out of the body.

Douglas was a candidate for fetal intervention; exactly one week from finding out that something was wrong with our son, on August 3, 2013 Douglas and I had fetal surgery to try to save his lungs so he could live. Had we not done the operation, he more than likely would have not survived the pregnancy.

Our pregnancy was closely monitored: we would go weekly, sometimes twice weekly, for doctor visits to check on amniotic fluid levels

Towards the end, the fluid was getting low, as we were watching a large collection of urine grow around his left kidney

At 35 weeks our doctors decided it was time to deliver.

The team at the Fetal Care Institute was great about having us meet all the specialists that would be taking care of our son while he would be in the NICU, and we were even able to tour the NICU. No parent wants to have to bring their newborn there, but if you have to, it is better to have an idea who will be caring for your baby and where he is going.

On Wednesday, November 13, I was admitted in SSM St. Mary’s Hospital in Clayton, Mo., to deliver our baby boy: He was born November 14, 2013 at 12:28 a.m. Within hours he was transported from the NICU at St. Mary’s to SSM Cardinal Glennon we were not even able to hold him because he has having a hard time breathing at birth and needed support of the doctors. He was five days old before he was stable enough to be held

Douglas spent 84 days in the NICU had many surgeries while he was there the first one he only barely 12 hours old for.

The urologist made a vesicostomy: a vesicostomy is an operation that makes an opening from the bladder to the outside of your child’s body. This opening is in the abdomen (belly), just below the navel (belly button). The opening lets urine drain out and prevents urine from being trapped inside the bladder. If urine is trapped in the bladder, it can back up to the kidneys and cause damage. Trapped urine may also cause infections.

In addition to the vesicostomy that time the urologist also placed drains in his kidney to drain the urine. ( the kidney drains were placed and removed multiple times as this would cause an infection for Douglas but without them his urine would not drain his body)

At 2.5 months of age after multiple stent placement and removals into his left (working) kidney it was decided that something more permanent needed to be done for Douglas.

His urologist decided to do a surgery to open up his kidney to drain directly to the outside of his body called a plyestomey. This is the surgery that finally got Douglas out of the NICU as his urinate, he was infection free, and his creatinine was stable.

Douglas has a rare condition called Prune Belly Syndrome also called Eagle-Barrett syndrome, is a condition characterized by three main features: 1. a lack of abdominal muscles, causing the skin on the belly area to wrinkle and appear “prune-like”; 2. undescended testicles in males; and 3. urinary tract problems.

He was born with an ASD or a hole in his heart. The heart team hopes it will close by age 5; if not, he will need surgery for that as well.

Douglas only enjoyed a few days at home after his NICU discharge before he was back in the hospital with more UTI (urinary tract infections). It was then when doctors decided to run tests to see if he had Hypogammaglobulinemia: an abnormally low level of immunoglobulins (antibodies also called proteins that help fight infections) in the blood.

Douglas receives monthly IVig treatments to help keep his immune system healthy – IVig therapy is Ig is prepared from the plasma collected from a large number of normal individuals, usually between 10,000-50,000, who have been carefully screened to make sure they are healthy and do not harbor certain infectious diseases.

The surgery on May 31, was to close his vesicostomy and plyestomey and to make a Mitrofanoff: is a small tunnel from the bladder to the outside of the body. This tunnel is used to empty the bladder with a catheter. A catheter is a small flexible tube that is put into the bladder through the mitrofanoff

Surgery also included an abdomeniplasty to remove excess skin from his prune belly syndrome. Doing this will help with everyday activities such as walking, climbing, eating, digesting food, and coughing to name a few.

The surgeon was successful at connecting his left kidney to his bladder, which was something we thought could never be done. His ureter wasn’t were it was supposed to be on his kidney and it was a mega-ureter so the doctor had to tailor it down to the correct size and implant it into the bladder into the correct position. Dr. Austin was then able to make the mitrofanoff.

Douglas was in the hospital for a total of a week which surprised all of us; we expected him to be in much longer; but he was doing very well so the doctors decided since we have so much experience with his care that we could take care of him.

Douglas’ kidney function is still monitored VERY closely; he is expected to outgrow his function in his childhood and need a transplant.

Only his left kidney provides function (His little kidney that could).

After his surgery we will have to undergo many more tests to see how the surgery has effected his renal function, and see his bladder capacity.

He still has a very long road ahead of him.

Douglas takes numerous medications a day to help with his condition –including meds for his high blood pressure, to medicine to make his urine less acidic, another medicine to remove potassium from his special renal formula.

It is important that we watch what Douglas eats because he cannot have food with high potassium as his kidneys cannot filter out the extra potassium.

Potassium plays a role in keeping your heartbeat regular and your muscles working right. It is the job of healthy kidneys to keep the right amount of potassium in your body. However, when your kidneys are not healthy, you often need to limit certain foods that can increase the potassium in your blood to a dangerous level. You may feel some weakness, numbness and tingling if your potassium is at a high level. If your potassium becomes too high, it can cause an irregular heartbeat or a heart attack.

Douglas has high blood pressure so if his potassium becomes too high it could be VERY dangerous for him.

• The median wait time for an individual’s first kidney transplant is 3.6 years and can vary depending on health, compatibility and availability of organs.

• Over 3,000 new patients are added to the kidney waiting list each month.

• 13 people die each day while waiting for a life-saving kidney transplant.

• Every 14 minutes someone is added to the kidney transplant list.

For more information on Douglas and to follow his story, visit: http://www.cardinalglennon.com/fetalcareinstitute/news/Pages/DouglasBladderOutletObstructionStory.aspx, or his Facebook page at https://www.facebook.com/babystepsdouglasjourney/info/?entry_point=page_nav_about_item&tab=page_info