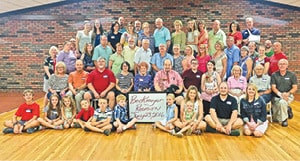 Beckmeyers from across the country recently came together to reminisce the nearly 160 year history of coming to America.

It all began around 1855 when the first of 7 children left his family in Hullhorst, Germany to venture to the new world of the United States.  Gradually one by one family members followed from Germany until September 1872.  Glowing letters had crossed the Atlantic from America finally convincing Heinrich Wilhelm Beckmeyer and his wife Anne Marie Katherine to sell the farm, leave Germany and join the rest of the family in the United States.

The first Beckmeyer Reunion was held in 1954 in Hoyleton Village Park where it was held again this year continuing the biennial gathering.  German accordion music provided by Walt Schissler from Nashville, Tenn., established the setting.  Don Beckmeyer and his family presented the family tree and Leonard Weber had a photo display of days gone by.

Between stories told, friendships re-established, games of trivia played and of course lots of good german style food shared, all the relatives enjoyed a fun-filled afternoon.

Don and Martha Drayton and their committee are greatly thanked for their hard work putting this event together.  The next reunion will be held in August 2018.