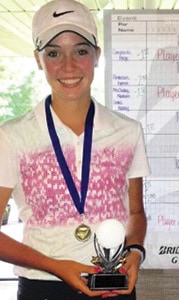 Nashville High School Junior Rachael Kell finished up the Southern Illinois Golf Association with a win, at the 6th Annual Junior Golf Tournament, which was held on July 31 in West Frankfort. Kell finished the tournament one stroke ahead of second place Josie Sykes of Carbondale. Kaci Rendleman finished third, followed by Jordan Stiegman in fourth, and Riley Anderson in fifth. Although Kell won the final tournament of the season, she was not able to catch Sykes who came away with the Player of the Year award. Kell finished second, followed by Stiegman in third.

Rachael Kell with the trophy for winning the SIGA Junior Golf Tournament on July 31.