On one of many walks with our dog, I noticed a tree that I couldn’t immediately identify. It was a hackberry (Celtis occidentalis), a member of the elm family or Ulmaceae. As so frequently happens, my husband pulled out many of his tree books, and I quickly had a multitude of resources with information about elms. I might mention that I was also given a leaf test in which I was to pick the row that contained leaves from elms rather than other trees!

One of the best books, and also highly recommended in my Master Gardener classes, is Manual of Woody Landscape Plants: Their Identification, Ornamental Characteristics, Culture, Propagation and Uses by

Michael A. Dirr. The American elm grows 60-80’ tall, with a spread of ½ to 2/3’s the height. It may grow larger with some American elms reaching 80-100’ in height and two to four feet in diameter. One of the trees most identifying characteristics is its form. Typically, the form is vase-shaped with the trunk dividing into several erect limbs arched above. However, the form can also be spreading, with heavy, far-reaching limbs characteristic of oaks. The simple leaves have another interesting characteristic—they appear lop-sided at the base of the leaf. The leaves grow 3-6” long and 1-3” wide. They are alternately placed, doubly serrated, and come to a sharp point. The dark green leaves have a slightly rough top surface, while the leaves are softly hairy underneath.

The native habitat for this majestic tree covers the area from Newfoundland to Florida but only west to the foot of the Rockies. The tree can grow in the western states, but it is not native to that area. The American elm prefers rich, moist soils but grows well under a variety of conditions.

At one time, this tree was used almost extensively as a lawn and street tree. Many New England towns were graced with the arching branches of this shade tree. As happens with many communities that do not use diversification in their planting programs, the American elm was overplanted and disease struck. In the 1930’s, Dutch elm disease invaded the United States and killed off millions of these trees. Many communities that still have these trees institute extensive maintenance programs, including spraying on an annual basis.

Cultivars have been developed over the years which show resistance to Dutch elm disease or a host of other diseases that affect elms, such as phloem necrosis (also known as elm yellows) and the elm leaf beetle. Some of the best cultivars include Delaware #2, Princeton, Washington and Liberty.

One tree showing a high resistance to Dutch elm disease, elm leaf and Japanese beetle, and phloem necrosis is Chinese elm or lacebark elm (Ulmus parvifolia). Do not confuse this tree with Siberian elm (Ulmus pumila), which sometimes the nursery trade labels as “Chinese” elm. Siberian elm is oftentimes seen as a “weed” tree with brittle wood, surface rooting and a lot of branch breakage.

Chinese elm, on the other hand, is valued as a landscape plant and adaptable to many urban conditions. However, it should not be planted in too small an area as it can disrupt sidewalks and curbs. Michael Dirr comments in his book that, “I predict the species will provide some of our most beautiful shade trees in the years ahead; in fact I will crawl out on a limb and predict a bright future in the 21st Century.”

For more information about this tree or any other tree, please contact your local Master Gardener or University of Illinois Extension office 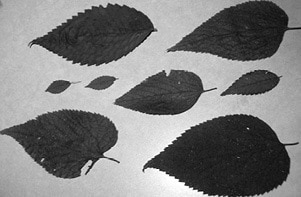 The American Elm: To Be or Not To Be