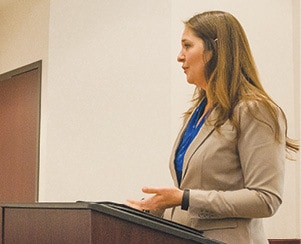 ABOVE, Kristen Schlaud, a site acquistion manager with Black and Veatch, a Verizon contractor, spoke with the Nashville City Council at their meeting on Thursday, August 4.

Verizon will be seeking to add more data coverage in Nashville using “Small cells” to bring coverage in areas that have gaps in there’s or too much usage to support using the infrastructure currently in place, said Kristen Schlaud, who spoke with the Nashville City Council during their regular meeting held on the evening of Thursday, August 4.

“Just from last year, there has been a 53-percent increase in the use of data,” Schlaud, who works as a site acquisition manager for Black and Veatch, a Verizon contractor, told the council.

The device that Verizon seeks to install would be a pole-mounted box with lines in for fiber optic line from the large cell tower at the edge of town (or “macro site”, as Schlaud phrased it), along with a power line in for the energy required to run the small cell, and an antenna for sending the data signal out. Each of the small cells would have a signal radius of 500 to 1,000 feet depending on how densely built up the area it is installed in is.

“These will complement the towers that are already there,” said Veatch.

Small Cells have been previously installed in Nashville by ExteNet Systems, but those units belong to that company and their additional bandwidth is leased to Verizon. The units Schlaud says she is seeking to install would be both owned and used by Verizon.

While city council members voiced their support for the idea overall, utilities superintendent Blaine Middleton had inquiries regarding any boring or trenching that would need to be done to connect the small cells. He stated that the city’s right-of-ways were already crowded and that they needed to be sure that at least some space remained for the city’s own future expansions and projects.

Schlaud told Middleton that Verizon preferred to use existing fiber and power infrastructure to connect the units and that she hoped additional boring and trenching would be unnecessary.

Schlaud also told the council that while Verizon had an idea of where they needed the small cells to be placed, they had not picked routes for the cabling to connect those sites and would be able to remain flexible when discussing those issues with the city.

”I say we put them in,” said council member Erik Rolf, who said that more data coverage for the area would always be helpful.

Nashville Police Officers are drawing up a proposal to switch officers to 12 hour shift, from their current eight hour shifts.

While the council was not yet able to vote on the proposal, Police Chief Brian Fletcher said that the new schedule would be set for a one year trial, once it comes up for approval.

Street department superintendent Rich Schuette said that he had an estimate for extending Mockingbird Road by approximately 100-feet at 24-feet wide, bringing it up to the entrance of GDB, International.

The extension would cost roughly $10,150, and the project would have that final stretch of Mockingbird Road shut down for approximately one week, while the concrete is poured and then cures.

The council approved Schuette’s plan and gave him the go-ahead to perform the work once his schedule opened up for it.

“It’s in your hands, Rich,” said Mayor Raymond Kolweier, “when you can get to it.”

Schuette stated that his crews would likely be tackling the project in early October.

The council opened bids for a new air conditioner to replace one of the units at City Hall. The council received two bids, from J&R Appliance and Miller Plumbing and Heating, with the bid from Miller being accepted at $3,180 for an American Standard Unit, compared to $3,880 for a Bryant Unit from J&R.

There was a request for one street light to be added to a pole on the 200 block of W. High Street which the council approved.

There will be no zoning board of appeals meeting for August.