Rain didn't slow down the Nashville Hornets Football team on Monday as they practiced in the pouring rain on August 15. The Hornets fresh off of last seasons success is getting ready for the scrimmage Friday Night. The Hornets first game is against Carlyle on August 26.

The Hornets are still in the Heat Acclimatization Period, set by the IHSA. The Heat Acclimatization Period runs for the first 14 days of practice. Practice began on August 8. The purpose of the policy is to address the safety of the athletes in early season practices. August 15 marked the second week of the acclimatization period. The second week, is the first full week, that teams are allowed to use full pads in practice. There is still limits on the amount of practice, teams can do each day. On August 17, teams have a five hour pracice limit, and no single practice can exceed three hours. There must be a two hour rest between practices. On August 18, there is a three hour practice limit, with a one hour walk-through. There must be two hours of rest between all practices and walk-throughs.. On Friday August 19, there is a five hour practice limit, and again no single practice can exceed three hours. Also there must be two hour rest between practices. On Saturday August 20, the same rules apply as on August 18. There can be no practice on August 21, which is the end of the acclimatizaion period.

The by-laws specify that each individual football player must participate in on-field practice for ninety minutes per day on twelve different days prior to playing in a game. And beginning the week after the acclimtization period, through the rest of the season, full-contact will be allowed in no more than three practices per week, and full-contact time is limited to no more than ninety minutes per week.

The Hornets first regular season game is against the Carlyle Indians on August 26. The Hornets play Massac County as the calendar turns to September. The Hornets also have matchups against Wesclin, Anna-Jonesboro, Sparta, and Carterville in September, before ending the season in October with games against Pinckneyville, DuQuoin, and West Frankfort. 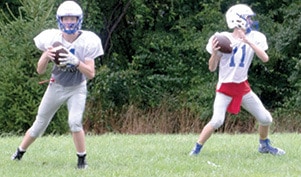 TOP: Hornets players run plays against each other
during a wet practice on August 15. RIGHT: Quarterbacks Andrew Kash and Carson Parker practice throwing in wet conditions.