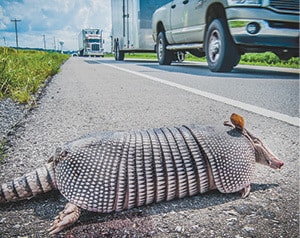 The Nashville News received several calls about a dead armadillo on the east side of 127 between Little Nashville and Mockingbird Road on Thursday, August 18, as well as a photo kind reader brought us, but we had to see it for ourselves.

Apparently, armadillo been making their way further and further north in recent years. We’ve heard a couple stories about people spotting them in Washington County, but none we could verify like this.

Probably best not to touch though.

A driver passing by warned that the animals can carry leprosy.

At first, we were skeptical of the claim, but upon later research back at the office, an article from none other than the Smithsonian, verified that due to their abnormally low body temperature for a mammal, they can be carriers of the disease.

One of the most interesting aspects of this photo though was not the armadillo itself, but the reaction to the photo once it was posted on The Nashville News Facebook page.

The photo went viral (at least by Nashville News standards), attracting scores of “likes”, shares and as of Tuesday morning, more than 21,000 views – our most popular Facebook post by a significant margin – beating out photo galleries from various NCHS sporting events and another from the DuBois Polishfest for the top spot.

Some were surprised by the animal being here, there were many stories from those who had seen or heard about other armadillo in southern Illinois.

One reader stated that her father found one, to his surprise, in a live trap in Addieville.

Another stated that he had first seen them in the area five years ago and that this was “old news.”

A college coworker of the editor even asked “Alex Haglund were you not at the DE when I wrote about it after finding one on the highway over to Chester?” (If I was, I did not recall the story -A.H.).

Some readers posted photos of other armadillo they had seen, like one found dead on the road in Addieville in April.

Other readers began sharing photos of other invasive wildlife they had seen, including feral hogs.

Whether this was the first time or the tenth that readers had seen or heard about armadillo in southern Illinois, the general reaction to discovering these creatures (or to seeing a live one) was surprise and shock at seeing them so far north of their more traditional range.

We also heard from many readers who lived in other states, particularly in the south, who described armadillo as a nuisance, animals that enjoyed digging up lawns and gardens.

To see more reader comments or read the various stories of armadillo in southern Illinois and the surrounding area, please visit The Nashville News on Facebook.

Follow us on Facebook while you are at it too. In addition to photos of strange roadkill, the page is where we first will put any breaking news that happens between issues of the paper, and we also post things like the video of the Harmony Roses singing (ABOVE), or galleries of photos we did not have the space to put in the paper.

Calls from readers brought The Nashville News to this armadillo killed by a car or truck on State Route 127 north of town on Thursday, August 19.