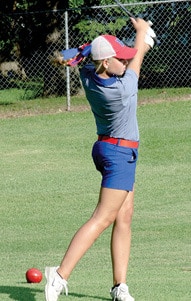 The Nashville Hornettes golf team, have gotten off to a strong start this season, as they finished first in the Nashville Invitational, and followed with a second place finish in the Mascoutah Invitational. The Hornettes defeated nine other teams on their way to victory. Competing in the tournament along with Nashville was Sparta, Massac County, Trico, Okawville, Pinckneyville, Mascoutah, Centralia, Carterville, and Waltonville. In the Mascoutah Invitational, the Hornettes finished second behind O’Fallon, and ahead of Massac County, and Althoff. Rachael Kell finished as the tournament’s top overall finisher, and Nashville came home with four medalists.

The Hornettes came out on top in the NIT, after a tiebreaker. After completion of play, Pinckneyville and Nashville were tied with 215 points. The tournament came down to the fifth best score on each team. Hope Reuter’s 47 easily beat Kayla Alms 71, to give Nashville the title. After Pinckneyville, Massac County finished third, Okawville finished fourth, and Mascoutah fifth rounding out the top five.

Pinckneyville came away with the top two overall scores as Sarah Breslin finished with a 34, and Megan Breslin finsihed with a 39. Brooke Bartling of Nashville was third with a 41. Millie Lawson was fourth overall with a score of 43, tied with Carterville’s Avery Rea. Sarah Guetersloh of Nashville rounded out the top six with a 44.

After Bartling and Sarah Guetersloh, Jill Guetersloh was third for Nashville with a 44, Jordan Stiegman was fourth with a 46, Reuter fifth with a 47, and Rachael Kell was sixth with a 48.

For the Lady Rockets, Meg Schnoeker finished with a 46 to lead the way, followed by Ashley Klasing with a 51, Megan Hettenhausen with a 52, Erin Klaing with a 60, and Elayna Santel with a 63.

At the Mascoutah Invitational, the Hornettes finished with a score of 331, seven strokes back of tournament champion O’Fallon. The
tournament featured 15 different teams, with Nashville being one of the smaller schools in the tournament. The Hornettes finsihed 21 strokes ahead of third place Massac County. Kell finished as the top overall finisher with a 78, just one stroke ahead of Millie Lawson of Massac County. Hope Reuter finished with an 82, which was seventh overall in the tournament. Jill Guetersloh shot an 85, and Brooke Bartling shot an 86 to both finish with a medal for the Hornettes.

Brooke Bartling tees off during the Nashville Invitational Tournament on August 18.