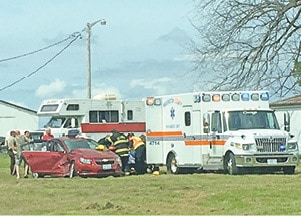 First Responders tend to the injured at the scene of Saturday’s crash.

Illinois State Police responded to a two vehicle crash which resulted in injuries requiring an Oakdale resident, James Hale, 33, needing to be evacuated by helicopter to St. Louis University Hospital for treatment of non-life-threatening injuries.

The state police reported the crash occurring at approximately 2:57 p.m., on Saturday, August 20, on State Route 153, at the intersection of County Road 10 (near Waller’s Market).

Per the report, Hale’s vehicle, a 2012 maroon Chevy Cruze, was traveling westbound on CR 10 and failed to yield at the stop sign at the intersection of SR 153. The second vehicle, a black Toyota Rav 4 driven by Kate L. Hughes, 20, of Freeburg, struck Hale’s car, which then struck a highway sign and a utility pole.

Both vehicles sustained major damage and were towed from the scene.

Hughes, along with her passenger, Nicholas J. Tantillo, 21, of Indian Head Park, were both taken by ambulance to Memorial Hospital in Belleville for minor injuries.

Hale was charged with failure to yield at a stop intersection.