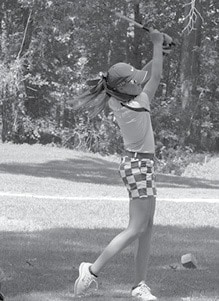 Rachael Kell tees off during the Okawville Invitational on August 27. Kell finished tied for first with teammate Hope Rueter with a 76.

The Hornettes continued their strong start to the season with wins this week in the Okawville Invitational, as well as against Pinckneyville and West Frankfort.

Leading the way for the Hornettes was co-medalists Sara Guetersloh, and Jordan Stiegman. The two Hornettes each shot a 43 on the day, which were the best rounds of the day. Brooke Bartling was third with a 45 followed by Jill Guetersloh with a 47. Rachael Kell, and Hope Rueter each got the day off for the Hornettes,a s Shaelin Heiman, and Kaitlyn Simons got the start. Coach Doug Kell said he will rotate out some of the normal starters throughout the year, in order for more players to get on-the-course experience. Heiman shot a 56, while Simons shot a 68.

For Pinckneyville Sarah and Megan Breslin led the way with rounds of 44. For West Frankfort, Rorrie House was the team-leader with a 51.

The Hornettes then traveled to play in the Okawville Invitational on August 27. The Hornettes again came away with a win, as they finished 40 strokes ahead of second place Okawville. The Hornettes finished with six of the top ten overall finishers in the tournament, led by Rachael Kell and Hope Rueter, who tied for the top round of the day with a 76.

Nashville finished with a total of 313 strokes, followed by the Lady Rockets, who shot a 353. Columbia finished third, followed by Trico, Marissa/Coulterville, Breese Central and Freeburg. Jill Guetersloh finished tied for third overall with an 80, followed by Brooke Bartling, who tied for fifth with an 81. Jordan Stiegman, Sara Guetersloh, and Okawville's Megan Hettenhausen all tied for seventh with an 82.

Erin Klasing of Okawville rounded out the top ten with an 88. Also playing for Okawville was Ashley Klasing with a 91, Meg Schnoeker with a 92, and Elayna Santel with a 118.