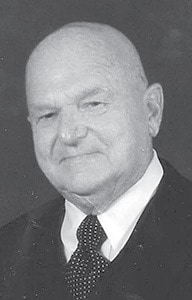 Mr. Watts was born on October 13, 1925 in Nashville, the son of James Albert and Ruth (Bernreuter) Watts. He was united in marriage to Imogene Decker on October 31, 1948 and she survives his passing.

Bud served in the United States Navy on a submarine in the Pacific during World War II. When the war ended Bud returned to Nashville and began farming. He and Imogene built a successful business which their son Tom continued in later years. Bud was one of the first farmers in southern Illinois to no-till soybeans directly into wheat stubble. He loved farming, fishing and hunting.

Bud was a lifelong member of the First Presbyterian Church in Nashville. He was active in school boards and contributed to many community projects over the years.

He was preceded in death by his parents and a brother.

A memorial service will be held at the First Presbyterian Church in Nashville, on Friday, September 2, 2016 at 10:30 AM with Rev. Phil Carson officiating.

A private graveside service will be held at Vernor Cemetery in Nashville. Military graveside rites will be accorded by the American Legion Post 110.

In lieu of flowers, memorials can be made to the American Legion Post #110 of Nashville and will be accepted by the Campagna Funeral Home, who is assisting the family with arrangements.