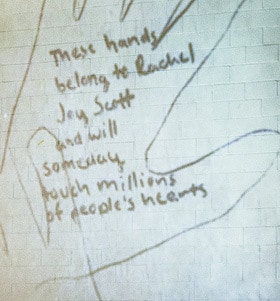 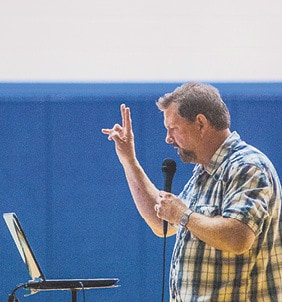 ABOVE, Larry Scott, the uncle of Rachel Joy Scott, the first person killed in the Columbine school shootings of 1999, goes over the steps of Rachel’s Challenge to parents gathered at the Nashville Primary School gymnasium on Wednesday, August 24. BELOW, A slide Clark showed saying, “These hands belong to Rachel Joy Scott and will someday touch millions of people’s hearts.” written by Rachel inside a tracing of her hands. 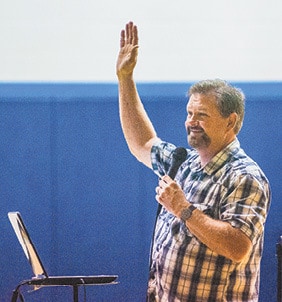 There is not a lot of sense that can be made from some of the more violent events of our times– and school shootings are some of the most senseless. Even amongst this senselessness, good can emerge from the most horrific occurrences.

Rachel’s Challenge, a movement to push positivity and end school bullying in the memory of Rachel Joy Scott, the first victim of the Columbine School shootings in Littleton, Colo., of 1999, is good emerging from horrifying circumstances.

At the time of her death at age 17, “Rachel left behind six diaries worth of good stuff,” said Larry Scott, her uncle, who came to Nashville Primary School on Wednesday, August 24, and gave a presentation to students during the day and to parents and adult community members in the evening.

Rachel’s words, her writing, and her actions in the community that was her school serve as the bedrock that Larry Scott and numerous other family and friends of Rachel Scott have built Rachel’s Challenge upon.

Scott believed that compassion was “the greatest form of love that humans have to offer,” as she wrote in an essay titled “My Ethics; My Codes of Life.”

The mission of Rachel’s Challenge is to share the story of Rachel’s kindness and compassion, awaken the connection between people, raise awareness, and through “interactive training and classroom resources”, bring about a hope, desire and purpose for individual transformation, and bring about security, identity and belonging for community safety, leading to achievement, “academic and social-emotional success: Learning”.

“I’m talking about a dream for your future,” Larry Scott said, regarding the students, adding, “Parents, I’m talking about something in their future they are going for that’s bigger than them.”

Scott also laid out what the challenge itself was– what those who wish to undertake it should do:

1. Eliminate Prejudice – Look for the best in others.

2. Dare to Dream – Set goals and keep a journal.

“Every one of us in this room is being influenced by something,” Scott continued. “It’s ok to be influenced, as long as it’s by something positive….by things that lift you up.”

Scott also took the time to talk about Rachel’s life and her actions, not just by what she said to her family and in her writings, but by what she did, according to other students who encountered her.

One story about Rachel came from her friend Amber, who was a new girl at school, and not having any luck making new friends, she was asked to join Rachel and her friends for lunch.

“All of a sudden, my worst day at school became my best day,” Scott said Amber relayed to the family after Rachel was killed.

Another friend of Rachel’s, Adam, was planning on committing suicide when Rachel made friends with him. Scott said that he said, “I was just so sick and tired of going to school every day.”

So while Rachel’s Challenge surely would like to see bullying and prejudice ended altogether, it’s these regular kinds of stories of heartbreak and acceptance, teasing and hope, that Rachel’s Challenge seeks to change as well– by giving students the tools and attitude to act like Rachel did, and to maybe do a kind act, or say a kind word and start changing things little by little.

“Wouldn’t the world be a whole lot better place if we all complimented each other more?” asked Scott. “Yes it would.”

• Over 1.5 million people are involved in Rachel’s Challenge programs.

• More than 1,200 schools and businesses are reached.

Larry Scott showed a slide of a tracing Rachel made of her hands with “These hands belong to Rachel Joy Scott and will someday touch millions of people’s hearts.”

As far as Larry Scott and the others involved with Rachel’s Challenge are concerned, that premonition has come true many times over.

“In the seventeen years since we lost twelve innocent lives, including Rachel, her legacy has touched 22 million people,” Rachelshallenge.org states, “and is the foundation for creating programs that promote a positive climate in K-12 schools. Her vision to start a chain reaction of kindness and compassion is the basis for our mission: Making schools safer, more connected places where bullying and violence are replaced with kindness and respect; and where learning and teaching are awakened to their fullest. And it works!”

For more information on Rachel’s Challenge, visit rachelschallenge.org on the Internet. If a student is encountering bullying and they don’t know what to do, please tell a parent, teacher, grown-up or mentor and let them know that there is a problem. 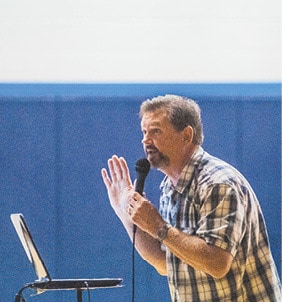