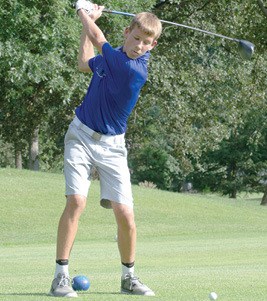 Freshman Carson Parker tees off during the Hornets match against Hamilton County and Harrisburg on August 30.

The Nashville Hornets boys golf team struggled this week, as they played two matches. The first match at home, was up against Hamilton County and Harrisburg. The Horents second match of the week was against Mater Dei, Okawville, and Belleville West, and was held at Triple Lakes Golf Course in Millstadt.

The Hornets ended August with a second place finish against Hamilton County and Harrisburg at home. Hamilton County won the meet with a final score of 164, seven strokes ahead of the Hornets. Harrisburg only had two players, therefore did not register a team score.

Leading the way for the Hornets was sophomore Kelton Harre, who shot a 40. Carson Parker finished second for Nashville with a 43, followed by Hayden Heggemeier, and Tyler Williamson. Both Williamson and Heggemeier shot a 44.

The Hornets next match was up against three other teams, as they finished 10 strokes behind the winner, Mater Dei, and five strokes behind second place Okawville. Nashville finished with a 174, just two strokes ahead of Belleville West. Jacob Maschhoff and Trevor Meier tied for first among Nashville players competing with a 42. Heggemeier and Harre each finished with a 45 at the meet.