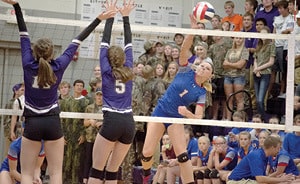 Mackenzie McFeron slams home a spike past two Central defenders during the Hornettes three game loss to the Cougars on September 1.

In the first game of the match, the Hornettes fell behind early and never could recover in the first game. The Cougars went on a run early in the matchup, and took an early 10-2 lead. The Hornettes would get as close as seven points, but could not make a comeback in the game, as the Cougars took the game 25-17.

The second game started much better for the Hornettes as they were able took keep pace early on with the Cougars. A back and forth game, the Hornettes got good serving from all five servers, and were able to come away with the win to even the match. Neither team was able to take control of the game as both teams were tied at 18. The Hornettes were able to grab control from that point, behind the serving of Sydney Schnitker, and Paige Kasten and took the game 25-21.

The deciding third game, featured a plethora of good defensive plays by both sides. The teams again traded points throughout the first half of the matchup. The Hornettes got down by four early but came back behind their serving, which was going to be a strength this season according to coach Josh Konkel. The Hornettes trailed throughout most of the game, getting close, but never tying the game. The Hornettes would cut the Cougars lead to 10-9 early in the game, but the Cougars pulled away from there on their way to a 25-16 victory. The win sealed the match for the Cougars.

After the game, Konkel talked about the match. “we gave them a start in the first, got behind, got a little momentum and then in the second game we took advantage of our good play and some mistakes they made. In the third game we got behind a little bit and couldn't dig out of the hole.” Konkel praised Central throughout the matchup, “they just keep coming and coming, any of those little battles at the net, they seem to win a lot of them, and they make you earn all your points. We just couldn't earn quite enough tonight.”