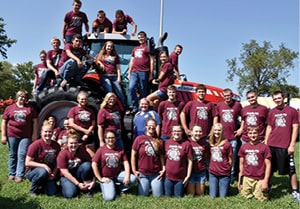 The Nashville FFA Chapter kicked off its 2016-2017 year by attending the DuQuoin State Fair Farmyard Follies on August 29, 2016. At the event, members competed against members from other chapters across Southern Illinois. During the competition, the matchup featured eight events such as: the water balloon toss, bale stacking, bale toss, tug-o-war, shovel race, bat race, tarp folding and backseat driving. Each of these events focused on promoting teamwork while allowing students to enjoy themselves, and providing them with the opportunity to meet other FFA members.