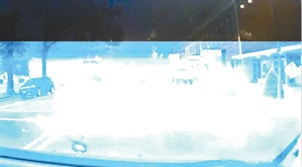 A flash of blue light from a lightning bolt striking the county communications tower washes over the view captured by meteorologist Tony Laubach’s dashcam as he headed through Nashville on State Route 15 Friday night while out stormchasing.

On Monday a swarm of vehicles and workers descended on and around the courthouse square in Nashville, troubleshooting and repairing damage to various systems in the courthouse and the ambulance/911 building, and in the businesses surrounding.

The cause for this activity went back to Friday night, when a lightning bolt struck the communications tower rising from between the courthouse and the ambulance headquarters, and when the vehicles around the courthouse were a different sort – firetrucks, first responders, and a meteorologist’s vehicle with a running dashcam which caught the blue flash of the bolt just as he passed through Nashville on State Route 15.

The meteorologist, Tony Laubach, working for WSIL 3 Television out of Carterville, was in the midst of chasing a line of storms running all along the I-64 corridor, yielding a tornado warning and later, flash flood warnings, when he headed through Nashville. Laubach posted the video and photo to his Facebook page, and soon, it had been shared by many in and around the area.

“I’d been chasing most of the day and this was the third or forth round of storms. I live in Murphysboro and I was coming back from Ashley, so I thought, ‘I’ll hit these storms in Nashville then head down 127 and head home.’” said Laubach, who stated that the storms had mostly passed by at that point and that he was expecting just to get footage of street flooding. “I was driving right in front of the building when it got struck by lightning.”

While the frame taken from Laubach’s camera shows SR 15 awash in blue light, the strike itself was not in frame, occurring almost directly to the right of Laubach’s window as he passed.

“Had I been two or three seconds back, I would have gotten the strike right when it struck the building,” Laubach said.

Having a lightning strike come that close (Laubach estimated roughly 50 feet away from him) was, “compared to normal people, not terribly unique,” Laubach said, but added, “to be that close to a strike and catch some sort of it on video, that’s pretty hard to do.”

“I felt it. I actually felt the warmth,” Laubach said. “It was close, it was very, very close.”

Laubach said he did not see where the strike had hit on the building exactly, and when he turned his head to look, “by that point, I had white in my eyes.”

There were some even closer to the strike than Laubach, even though they weren’t outside. Washington County Ambulance Department were on call and were in their headquarters when thousands of volts of electricity coursed through their building.

“We had lightning from every outlet,” said Paramedic Matthew Bierman in a Facebook post following the strike. He also reported smoke in the building, but thankfully, no injuries. Like Laubach though, Bierman and other paramedics were close enough that the strike was a shocking one indeed.

The strike wreaked havoc on various electrical and information systems on the courthouse square, with those who were in the ambulance building stating that there was sparking and smoke following the strike.

Damage was done to the backup 911 system in the ambulance/911 building, digital radio equipment, the courthouse’s emergency generator, and to the courthouse’s telephone, elevator and HVAC system, which were still down as of Monday afternoon. On Friday evening, there were also issues with computers and phones at the Sheriff’s Department across the street, but those were fixed over the weekend.

Further, as damage was repaired, more continued to be found, with sensitive systems like computers and phones being affected along with heartier ones like electrical circuits and generators.

Even as of press time, a full assessment of the damage was still ongoing, according to County Board Building Commission Chair Gary Suedmeyer.

“We may be having something come up for the next few days yet,” said Suedmeyer.

Businesses near the courthouse were affected as well, with the Nashville Chamber of Commerce, Kesel’s Hardware, and Michelle Heckert CPA all without phone or Internet connections as late as Monday afternoon.

The Nashville News was also impacted, losing a cable modem and a network switch due to the strike (as well as most of a day of work due to our use of design software requiring an Internet connection to function normally).

In addition to the lightning strike, the storm dumped rain on the area, with flooding reported Friday night along SR 15. The Nashville water treatment plant, which operates a weather station, reported that between 8 a.m. on Friday, September 9, and the same time on Saturday, September 10, 2.39 inches of rain had fallen.

Laubach’s video of the lightning strike can be found at https://youtu.be/C7EoWRyYY8A or on his Facebook page “Meteorologist Tony Laubach”. The video is shared to The Nashville News Facebook page as well.