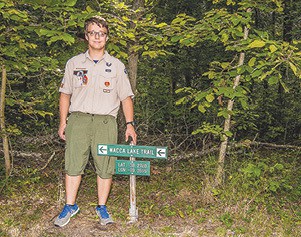 Nashville Troop 127 Eagle Scout candidate Brent Harris near one of the trail marking signs (with GPS coordinates), which he installed at Washington County State Lake.

There are new signs marking the Wakka Lake Trail around Washington County State Lake, and new houses for the ducks and waterfowl on the lake itself, thanks to the Eagle Scout service project carried out by Nashville Troop 127 Boy Scout Brent Harris, 16, a junior at Nashville Community High School.

The signs marking the trail are green and white plastic and are deeply engraved, not merely printed and should last for a very long time. The duck houses are made of wood and were made by Harris himself.

The project was a very good fit for Harris as a scout, who said that he enjoys scouts because, “I get to be outside a lot and I get to help people.”

The project’s first stage was planning and then the proposal, which had to be approved by the troop and council.

Along with the sale, Harris sought and received both monetary and material donations from area businesses.

The signs will help hikers follow their path around the lake, and feature GPS coordinates, out to four decimal places, which is fairly accurate. Harris said that he also dropped a stack of maps off at the park’s bait shop for use by hikers.

Along with fellow scouts and his donors, Harris was also assisted by his family. He is the son of Joel and Sheila Harris, and the older brother of Brooke and Amy. Joel is a Cub Scout leader in Nashville, getting involved in Scouting shortly after Brent did as a young grade schooler.