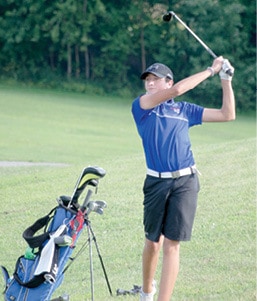 Kelton Harre watches his shot on the ninth hole at Bent Oak Golf Course in Breese on September 6.

The Hornets next action of the week was in the Nashville Invitational. Eleven teams made the trip for the tournament. The weather played a role as the golfers had to be brounght in for about a half hour, due to heavy rain, and puddles beginning to form on the course. Pleasant Plains came out on top with a score of 166, four strokes better than second place Mater Dei. Nashville was close behind, finishing with a 173 in third place. Okawville finished in sixth place with a 193 on the day.

Six golfers braved the rain for Nashville, and they were led by Maschhoff and Hayden Heggemeier who each shot a 42. Meier was third for Nashville with a 44, followed by Harre with a 45. Williamson shot a 47, while Carson Parker shot a 48 on the day.