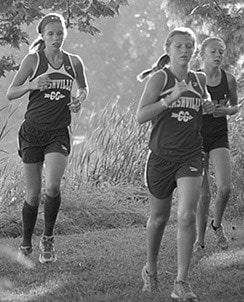 The Okawville boys placed 12th in Sparta. The Rockets were led by Drew Frederking in 49th place with a time of 20:34. Frederking was followed by Russell Rodely in 54th place, Josh Madrid in 60th place, Tyler Roesener in 61st place, and Payton Riechmann in 77th place. The lone other runner in the varsity race for Okawville was Logan Riechmann.

LEFT: Brittinie Bartling and Sabrina Kollbaum stay together on the course during the Nashville Invitational. RIGHT: Landon Davis finishes the race strong in 22nd place.