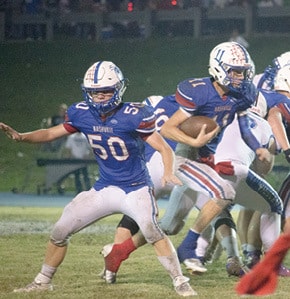 The Nashville Hornets football team fell to 2-2 on the season, after losing a close game to Anna-Jonesboro on Friday night. The Hornets fell behind 14-0 in the first half, but battled back to tie the game late before falling 26-20.

Both defenses stood tall early, as the game stayed scoreless until late in the first quarter when Jayce Turner broke through the line for a 23 yard touchdown. The Wildcats would add the extra point to take a 7-0 lead with 3:14 left in the first quarter. Nashville would get the ball back on their own 22 yard line, and began marching their way down the field. The Hornets got a big third down conversion when Andrew Kash found Ethan Reid for a 13 yard pickup to cross midfield. The Hornets could not put points on the board, as their drive would stall, opening the door for Anna-Jonesboro to extend their lead.

Anna-Jonesboro again took the ball down the field, taking almost four and a half minutes off the clock, capping off the 10 play drive with a fourteen yard touchdwon run from quarterback Bryce Osman to extend their lead to 14-0 with 6:55 remaining in the half. The two teams would trade punts on their next drives, and the Hornets would get one more opportunity to score before half.

With time winding down, the Hornets got the ball on their own 28 yard line. Nashville used a balanced attack to drive down the field using all three timeouts. After a sack by Anna-Jonesboro forced third and goal from the eighteen yardline, Neil Kachuba would jump high in the end zone, catching a pass from Kash to cut Anna-Jonesboro's lead to 14-6 going into halftime.

Anna-Jonesboro got the ball after half, and conducted a long drive, chewing up eight minutes off the clock. The Wildcats did not throw a pass on their fourteen play drive, eventually punching the ball in from six yards out, extending their lead to 20-6. The Hornets would cut into the lead almost immedately as Ethan Reid took the Hornets first play from scrimmage in the second half 55 yards down the sideline for a touchdown. An extra point by Quinn Laws would get the Hornets within seven with 3:38 remaining in the third quarter.

With Anna-Jonesboro driving down the field, the Hornets' defense came up with a big play to start the fourth quarter as Issac Sexe recovered a fumble by the Wildcat's Turner, giving Nashville first and ten on their own fourteen yard line. It did not take the Hornets long to tie the game as Cameron Parker caught a short pass from Kash and made the Wildcat defenders miss, on his way to a fifty yard touchdown. Laws extra point would tie the game with 8:44 remaining in the game.

Anna-Jonesboro would take the kickoff and give themselves great field position as they started their drive almost in the red zone at the 23 yard line. The Wildcats would take the lead in just three plays as Turner scored his second touchdown of the game. The Wildcats missed the two point conversion, and led 26-20.

The Hornets would have one final drive as time wound down in the game. Nashville would start the drive on their own 37 yard line with just over seven minutes remaining. The Hornets would quickly cross midfield, on a 20 yard run by Kash. The Hornets would have first and ten at Anna-Jonesboro's 29 yard line, but a holding penalty on second down set them back 13 yards. On third down, Kash ran up the middle, but could only manage four yards, setting up fourth and twenty from the thirty-nine yard line. Kash's pass would fall incomplete, and Anna-Jonesboro ran out the clock to win the game. After the game Coach Kuhn talked about the third down play, “ we were going to try and make it a manageable fourth down, and we'd had success with that play earlier in the game, it'd probably been a 12 or 13 yard play on average, and they made a play.”

After the game, Coach Kuhn talked about his team's execution, “we didn't execute on defense, we didn't execute on special teams, we had a big penalty on our last drive that kind of stalled us out, but you know when you come down here Coach Detering has been here long enough that they're gonna be ready.”

Kash finished the game with 148 yards through the air, and 60 yards on the ground for Nashville. Reid led Nashville on the ground with 85 yards rushing, 55 of which came on his touchdown run. Grant Reed finished with 15 yards, while Arturo Garcia finished with four yards on one carry. Parker finished with zero yards on two carries, but led the Hornets with 90 yards receiving on seven catches. Reid caught three passes for 29 yards. Kachuba caught two passes for 24 yards, the big catch being a six yard touchdown with less than 30 seconds remaining in the first half. Drew Barczewski caught one pass for five yards. The Hornets finished with 312 yards of offense.

The Hornets are back home this Friday night against Sparta. Sparta is 0-4 on the season. The game will benefit JDRF. The game begins at 7 p.m.

Andrew Kash follows his blockers up field as he takes the ball through the middle of the Anna-Jonesboro defense during a 26-20 loss to the Wildcats on Friday night.