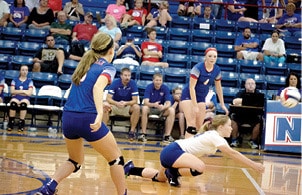 Abby Wesselman dives for the ball during the Hornettes three game loss to the Sparta Lady Bulldogs on September 15.

The Hornettes would then come back home for another conference matchup against the Sparta Lady Bulldogs. Sparta jumped out to a win in the first game 25-19, but the Hornettes were able to battle back to take the second game 25-16. That set the stage for a deciding third game, in which Sparta was able to pull out the victory 25-19. The first game of the match was closely contested with both teams trading points until Sparta went on a 9-1 run with the game tied at 10. The Hornettes battled back, but could not make a comeback as they dropped the first game, 25-19. In the second game, Nashville rushed out to a 15-5 lead and was able to cruise from there to a 25-16 victory, to force a third game. In the third game, Nashville led by as many as four points early, but Sparta came back to ie the game. The teams would trade points back and forth until Sparta went on a 7-1 run, after the game was tied at 18 to close out the match.

Jenna Harris led Nashville in the match with nine kills, followed by Holle and Kasten, who each had eight in the loss. Kempfer notched six kills, while McFeron had four. Abby Wesselman led Nashville with 12 digs on the night, while Harris had seven. Sydney Schnitker, Holle, and McFeron all tied with four digs apiece in the loss

The Hornettes were affected by injuries in this match and coach Josh Konkel talked about it after the match, “middle hitter is one area where we have really taken a beating. We are using our sixth different middle hitter on the year. We had a freshmen out there trying to stop Sparta's big middle who got on a roll in the third game. Injuries are taking a toll, McFeron is out there trying to battle through it, but she's not herself and it's just hard to play when you have that young a team out there.” Konkel also praised the team for their effort this season, “we're competing, and focusing and trying to get those wins, but we're shorthanded and just trying to push through and find something that clicks.

The Hornettes played Carterville on Tuesday night and travel to face off against Pinckneyville on Thursday night. Other than tournament play, the Hornettes have just two non-conference matchups left against Centralia and Mater Dei before Regionals begin on October 24.