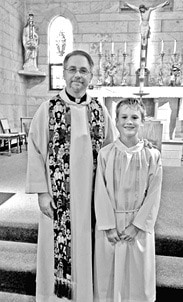 Fifth grader Jonathon Smith was baptized at St. Ann Catholic Parish a week ago Friday and received his first communion at Mass the following Saturday.

Father Andy Knopik announced at Mass that Jonathon had been baptized on his birthday on Friday and that he would be receiving his first communion.

After Mass was over, a woman who wished to remain anonymous came up to the Smith family including Jonathon and said that she was so moved by his announcement that she gave him $100 in cash to give to the charity of his choice. She wanted him to “pay it forward”.

She stated she was not a parish member, but knows Father Andy and was in town and just thought she would come to church that day.

Jonathon was so excited and used the remainder of the weekend to contemplate what charity he might donate to.

He chose “Food For the Poor” which helps feed hungry children in underdeveloped countries such as Haiti. The $100 will pay for three piglets for one family.

Her generosity really gave him the chance to have that feeling of giving to others and “paying it forward”. Congratulations to Jonathon and the Smith family.