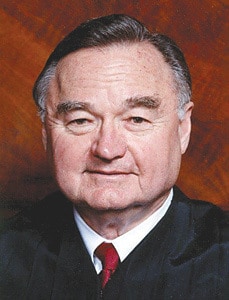 The Illinois Supreme Court announced Monday that Justice Lloyd A. Karmeier will be its next Chief Justice. Justice Karmeier was unanimously elected to the office by his fellow justices and will serve a three-year term commencing October 26, 2016. He succeeds Rita B. Garman, whose tenure as Chief Justice ends October 25, 2016.

An installation ceremony honoring Justice Karmeier’s election as Chief Justice will be held at the Supreme Court Building in Springfield on Monday, October 31. Justice Garman will administer the oath of office.

Justice Karmeier will be this State’s 120th Chief Justice and the second person from Washington County to hold that office.

Justice Byron O. House, for whom Justice Karmeier served as a law clerk, was the first.

“I appreciate the confidence shown by the other members of the court in electing me to this position,” said Justice Karmeier. “Since joining the court in 2004, I have had the privilege of serving under five different chief justices, all of whom have done an outstanding job. I will do my very best to live up to the high standard they have set.”

In passing the gavel to Justice Karmeier and reflecting on her own tenure, outgoing Chief Justice Garman stated:

“I congratulate my friend and colleague, Justice Lloyd Karmeier, on his selection as our chief justice. I have known Justice Karmeier for many years and hold him in the highest regard. I have always appreciated his thoughtful legal analysis and his judicial temperament. Justice Karmeier is one of those rare individuals who can graciously offer and accept constructive criticism. As a result, his comments to me have often improved my opinions; my comments to him are always given due consideration. This ability to be open-minded and collegial is important in any justice, but most particularly in a chief justice. He will do a marvelous job.

As I leave this role, there are several projects and initiatives that have begun over the past three years, but are not yet fully realized. I know that these projects will be in capable hands and that he will provide the leadership needed to see them through to fruition.”

Justice Karmeier is a native and life-long resident of Washington County, where he attended a one-room grade school. After graduating valedictorian from Okawville Community High School, he attended the University of Illinois, where he received both his undergraduate and law degrees.

Justice Karmeier clerked for former Illinois Supreme Court Justice Byron 0. House from 1964 to 1968, served as state’s attorney of Washington County from 1968 to 1972, and clerked for U.S. District Court Judge James L. Foreman from 1972 to 1973. He was engaged in the general practice of law with the firm of Hohlt, House, DeMoss & Johnson from 1964 to 1986. He was resident Circuit Judge of Washington County from 1986 to 2004, when he was elected to the Illinois Supreme Court. Justice Karmeier was retained in office for a second term as a Justice of the Supreme Court in November of 2014.

In addition to his regular judicial duties, Justice Karmeier is the Supreme Court’s liaison to the Attorney Registration and Disciplinary Commission, the Minimum Continuing Legal Education Board, and the Supreme Court Committee on Jury Instructions in Criminal Cases. Since 2013, he has also served as Chairperson of the Illinois Courts Commission, the independent body established under the Illinois Constitution to hear and decide cases in which judges are charged with official misconduct. He will leave that post upon assuming his duties as Chief Justice and be succeeded by Justice Anne M. Burke.

Justice Karmeier and his wife, Mary, reside in Nashville, Illinois. They have two children and six grandchildren.

As Chief Justice, Justice Karmeier will serve as the chief administrative officer of the statewide judicial system with supervisory authority over the more than 900 judges in the state.

Among other duties, the Chief Justice controls and schedules the Supreme Court’s agenda for consideration in conference by the Court during its five formal terms each year, supervises all appointments to Supreme Court committees, serves as chairperson of the Executive Committee of the constitutionally-mandated Illinois Judicial Conference and presents the Court’s annual budget request to the General Assembly.