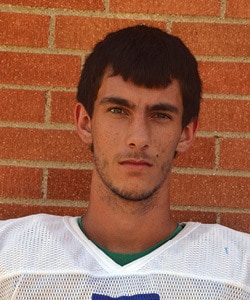 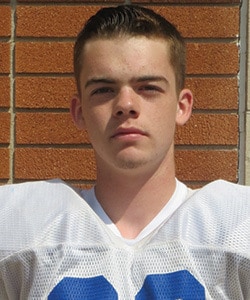 Alec Johns in a senior cornerback on the Nashville Hornets football team. Alec is the son of Michelle and Eric Johns and has two brothers, Niven and Nicholas. After high school, Alec plans on studying mechanical engineering, and hopes to run track at the college level.

Alec's favorite sports memory is making it to state twice during grade school, and one of his main goals this year is to start on defense for the Hornets.

Alec has been playing sports for nine years, and began playing football because of Hornets coach Tim Kuhn. If he could tell anything to underclassmen it would be that everyday is a chance to get better.

Neil Kachuba is a senior wide receiver and cornerback on the Nashville Hornets football team. Neil is the son of Fred and Dianne Kachuba, and has two siblings Zach and Sunny. After high school, Neil plans to study mechanics or agriculture in college.

Neil’s favorite sports team is the St. Louis Cardinals, and outside of sports he likes hunting, fishing, and farming.

If he could give advice to the underclassmen playing football it would be to take in every moment that you have.

Neil doesn’t have a specific favorite thing about practice, but he just likes being out on the field. Neil’s goals for this year are a championship.