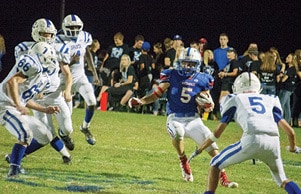 Turnovers In Win Over Sparta

Grant Reed takes the ball and looks for a way around Sparta defenders during the Hornets’ dominating 41-8 win over the Bulldogs.

The Nashville Hornets football team got back above .500 with a dominating 41-8 victory over the Sparta Bulldogs. The Hornets scored early and often on their way to their third victory of the season. The Hornets are home again next week as they take on the Carterville Lions.

The Hornets got off to a great start in the game, and took the opening drive down the field for a touchdown. Ethan Reid punched the ball in from two yards out to open the scoring. Colin Laws would add the extra point to give Nashville the early 7-0 lead.

Sparta's next drive would start on their own twelve yard line, and would span 15 plays, taking over seven minutes off the clock. Sparta's drive would end when Reid picked off a pass from Sparta's Kyah Banda. Reid would score his second touchdown of the game six play later to give Nasvhille a 14-0 lead after the extra point early in the second quarter.

Sparta would catch a break on their next drive, after Nashville forced a punt. Sparta kicked a low line-drive punt that hit Grant Reed, allowing Sparta to recover the ball, and got the Bulldogs a new set of downs. Sparta could not do naything with the fress set of downs, as the Hornets forced another three-and-out.

Nashville would not take long to extend their lead as their next drive lasted only five plays. The big play on the drive was ANdrew Kash finding Reid for a 39 yard connection. Seth Guinup would punch the ball in on the very next play to extend the HOrnets' lead. Another Extra Point by Laws made the score 21-0.

After Nashville forced another three-and-out by Sparta's offense, Kash capped off a quick 88 yard drive with a 52 yard touchdown run to extend Nashville's lead to 27-0. IT wouldn't take long for Nashville to extend their lead, as less than a munute later, Nashville's Neil Kachuba picked of a pass, returning it 19 yards for a touchdown. the Extra Point gave Nasvhille a commanding 34-0 lead with 1:37 remaining in the first half.

By IHSA rules, a running clock was instituted in the second half. Sparta's only points of the game would come  late in the fourth quarter on a thirty yard run by Naseur Hobbs. Sparta would convert the two point conversion. The Hornets would run out the clock from there to win the game.

After the game, Hornets coach Tim Kuhn talked about the defense stepping up, “for a second there, I was really concerned, their option game was running, but we found a way to get a turnover and kind of turn them back, and from there we did our thing.”

Kuhn also talked about the punt that gave Sparta a fresh set of downs in the first half, “a mistake happened but we didn't dwell on it.”