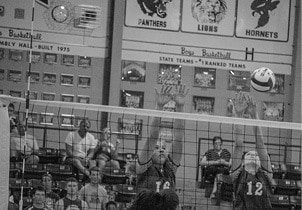 Senior Janie Holle and freshmen Sydney Schnitker jump up high to try and block the spike from Carterville, during Nashville’s two game sweep of the Lions.

In there first match of the week, the Hornettes won a thrilling first game over Carterville, A back and forth game, saw the two teams trading points through the first half of play. Carterville would go on a run taking a 19-13 lead, but could not hold on, as the Hornettes stormed back, being led by senior Janie Holle, as they were able to tie the game at 20. The rest of the way, each team would try and grab the momentum. The Hornettes would face game point twice in the match-up, before coming back for a 27-25 victory over Carterville. In the second game, Carterville stayed close in the beginning, but Nashville ran away with the game, outscoring Carterville 15-5, to end the game.

After the game, Hornettes coach Josh Konkel praised the team's perserverence in the first game, "We showed a little pride, we dug down, told them just to play every point, one at a time, get that point back." Konkel went on to say, "we seized that momentum and took it to them."

Abby Kempfer and Mackenzie McFeron each had six kills to lead the team in the match, followed by Paige Kasten with five, Jenna Harris with four, and Janie Holle with three kills in the win. Kasten led the team with 19 assists in the win, while Harris added four. Holle led the team with nine digs, while Abby Wesselmann, Kasten, and Harris all tied for second on the team with seven digs apiece.