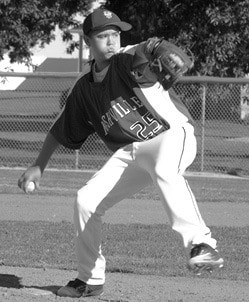 The Jr. Hornets came away with their fourth straight Regional Championship win, after defeating Okawville on September 26. The Jr. Hornets played the game, at Okawville, after it was moved from Breese earlier in the day. The Jr. Hornets go into the State Tournament, with wins in seven of their last eight contests.

On September 12, the Jr. Hornets defeated Chester 16-1 in just four innings. Nashville was able to blow the game open in the second inning, when they scored eleven runs. Ian Blazier led the way with three hits, three runs scored, and three RBIs in the game. Cole Malawy also finished with three runs scored. Gavin Baldwin finished with three RBIs and Nolan Heggemeier finished with 2 RBIs. The winning pitcher for Nashville was Aaron Brink, who allowed one run on two hits in three innings. Radyn Schwartzkopf pitched a scoreless inning in the win.

The Jr. Hornets were back in action on September 13, when they shut out Sparta 16-0 in four innings. Nashville started off quick with ten runs in the top of the first inning. Malawy, Blazier, Michael Combs, and Luke Ehret each had two hits in the win. Preston Dagner was the winning pitcher for Nashville, as he gave up just two hits in three innings. Kolten Gajewski pitched the final inning of the game.

On September 14, Nashville defeated Murphysboro 11-0 in five innings. The Jr. Hornets had another fast start to the game with nine runs in the top of the first inning. Zach Kempfer led the offense with three hits. Malawy and Blazier each added two hits in the win. Camden Ritzel pitched a complete game shutout, allowed just one hit, and struck out six batters.

Nashville's next game was a close 8-6 win over Trico on September 15. The game was back and forth throughout as Nashville scored a run in the first, three runs in the second, one in the fourth, two in the fifth, and one in the sixth. Trico answered with two runs in the second and third, and one run apiece in the fourth and the fifth. Blazier and Ehret each had two hits in the game to lead the offense. Kempfer was the winning pitcher in the game, allowed six runs on seven hits and struck out five in five innings of play. Jaxon Goforth pitched two shutout innings in relief, and struck out three.

The Jr. Hornets' next game came up against Murphysboro on September 19. Nashville was able to cruise to an easy 16-1 win, in just four innings. Nashville scored six in the first, four in the second, and five in the third to blow the game open. Baldwin led Nashville offensively with three hits, one of which was a solo home run. Blazier, Goforth, and Ehret wach had two hits. On the mound, Dagner came away with the win in the game, allowing one run on three hits.

Before heading into regionals, Nashville finished up the regular season with a game against DuQuoin on September 20. The Jr. Hornets could not pull out the win, as DuQuoin scored a narrow 6-5 victory. Nashville was held to just three hits in the loss. Blazier, Baldwin, and Combs each had a hit in the ballgame.

Nashville started off regional play with a 5-3 win over Breese. Malawy led the way with two hits and 3 RBIs, followed by Ehret who had two hits. Kempfer got the win on the mound, as he allowed one run, on one hit, with four strikeouts in five innings. Camden Ritzel pitched the final two innings, and gave up two runs, on four hits, with five strikeouts.

The Jr. Hornets then moved into the Regional Championship game against Okawville. A close game throughout, Nashville was able to come out on top and win the Regional Championship 4-2. Nashville got on the board first in the game with two runs in the third inning after Ehret led off with a single, and Heggemeier walked. With one out Blazier flew out to left, and an errant throw allowed Ehret to score. Heggemeier would score on a wild pitch. In the fifth, Nashville scored again after Malawy reached on an error, and scored when Goforth was hit with the bases loaded. Baldwin scored the fourth run in the seventh inning. On the mound, Kempfer pitched all seven innings for the win.

The Jr. Hornets will now face off against Albion, on Saturday in the first round of the state tournament on Saturday.

Zach Kempfer delivers a pitch during the Hornets 4-2 victory over Okawville in the Regional Championship game. Kempfer pitched all seven innings for Nashville.