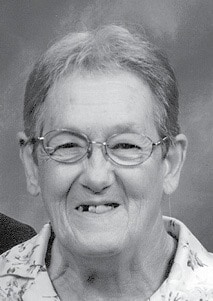 She was born on September 27, 1932 in Irondale, Mo., the daughter of Amos and Hazel Swacker Ringer. She married Willard Brink on April 2, 1960 in Mahomet and he passed away on October 24, 2007. Also preceding her in death were her parents, a brother and two sisters.

Left to mourn her passing is a sister-in-law, Beatrice (Bill) Motzer of Fischer; and her dear friends, Carol Moeller, Angela Creed and her husband Edward Hengel.

Funeral services were held on Monday, September 26, 2016 at the Styninger Funeral Home in Nashville with Rev. William Bunnage officiating. Burial was at the North Prairie Cemetery near Hoyleton. Memorial contributions may be made to Grace United Methodist Church.