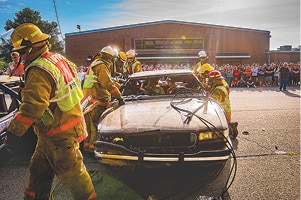 There was a two car crash that area fire, law enforcement, ambulance, coroner and even evacuation helicopter personnel responded to in front of Nashville Community High School on the morning of Tuesday, September 20. Both cars were full of students, all of whom were injured, and one even left the scene in a hearse. The only good news following this texting-while-driving accident, was that it was all a drill or a simulation, put on in order to help students see the possible consequences of irresponsibility when they are behind the wheel.

Of the student body, the only people who knew about the “crash” ahead of time were the victims in the cars, who agreed to participate, along with their parents. The other students watching the scene unfold were not told ahead of time, to avoid lessening the impact.

“We were lucky that we had enough to do it,” said Pasero, “because it’s emotional for them, and for their parents.”

“It just gives them something to think about,” Pasero said, “and it impresses on them that it’s a big responsibility when they are behind the wheel.”

LEFT, Nashville Volunteer Firefighters and other area first responders work to extricate “victims” trapped in the vehicles after a simulated texting-and-driving wreck in front of NCHS on Tuesday, September 20. RIGHT, one of the “victims”, Paige Kasten, was evacuated from the scene by helicopter.