By Will Summers, Master Gardener

We’ve reached the time of year in Southern Illinois when our “sea of corn” is being harvested. There are approximately 13 million acres of corn grown in Illinois, and that ranks us #2 in the nation (behind Iowa). This article seeks to further appreciation for this magnificent natural resource. The scientific name for corn is Zea mays, but is “maize” in Spanish. The name “corn” is used for most any cereal grain worldwide but is the name for wheat in England, oats in Ireland and Scotland and wheat or barley in the Bible.

Corn History: Corn is not native to Southern Illinois but originates in Central and South America. It is thought that the earliest cultivation of corn began more than 8,500-12,000 years ago in Central Mexico.

Corn has been grown in Southern Illinois for more than a thousand years. Native Americans were the first to cultivate corn in our surrounding counties. Our original settlers traded for local corn varieties with Native Americans and also brought in other varieties from the New England states. Corn retains its nutrition in storage. With cultivation, corn returns large crops with minimum effort. Corn grows well alongside other important native food crops such as beans and squash. Corn is entirely dependent on mankind for its existence.

Corn Plant Physiology: As a plant, corn is related to all grass in the graminoid plant family. However, corn differs as a “warm-season” grass whose photosynthesis follows a uniquely efficient pathway of storing additional carbon atoms ranking it a “C-4” plant. Other “cool-season” (subject to cold weather and seasonal dormancy) plants fix carbon as a less efficient, 3-carbon molecule.

As a warm-season plant, corn is not frost-tolerant and only produces in warm or hot, long summer days. Some say, if you stand in a cornfield in mid-summer, you will actually hear the corn stalks creak as they grow.

Corn originated as a plant less than 3 feet tall. Most field corn in Southern Illinois has been bred to be a uniform height of about 10 feet tall; however, some varieties have been known to reach a height of nearly 40 feet.

Corn is a “monecious” plant meaning that both flower sexes occur on the same plant. However the male flowers, or stolens, occur on the top of the plant as “tassle” while the female portion occurs as the “ear” at some distance below. This separation fulfills an important function of enabling cross-fertilization between nearby plants as summer breezes move pollen in the field. Pollination occurs only when a pollen grain lands on the fresh silk protruding from the ear.

Corn Varieties: Although there are now dozens of varieties of corn, the cultivation falls into four major types: Dent, Flint, Pop and Sweet.

Dent corn is field corn and has been hybridized into many different forms favoring machine cultivation and its many uses. It is primarily grown for livestock feed and ethanol production.

Flint corn is what is referred to as “Indian-corn” which has a hard outer shell and occurs in all colors from white to blue and browns.

Sweet corn has also been hybridized for its many favorable traits for appearance, taste and marketability.

Popcorn is as its name implies, has starches and an impervious coat which allows it to swell and explode when heated.

Corn Production: Corn is commercially grown in only 14 states on 80 million acres, although it is produced to a less-extent in every state in the U.S. A bushel of shelled corn weighs about 56 pounds. An acre of corn produced less than 30 bushels per acre in 1940 has risen to about 180 bushels in 2004. Acres planted to corn in Illinois increased yearly through the 1970’s when production shifted many acres away from corn to rapidly expanding soybean cultivation. More than 13 billion bushels or over 30 billion tons of corn were produced in the U.S. in 2014 which accounts for approximately 44% of the world’s production.

Corn Genetics: After several years and more than 40 million dollars, the corn genome was decoded in 2009. Corn has only 10 chromosomes compared to human that have 23 pairs. However, corn has 32,000 coding genes compared to only 20,000 in humans. This difference produces the immense diversification in corn and contributes to its vast potential.

Corn Today: This article would be better titled: “Corn, What Can You Make of It?” because corn has so many uses and has found its way into almost every facet of our lives today. Corn’s uses range from not only food but to clothing, building materials, shoe polish, marshmallows and ethanol production.

Corn as Food: Corn supplies at least eight of the nine essential amino acids. As a vegetarian, you could survive on a strictly all-corn diet, with only a small amount of additional nutrients. In fact, many people around the world do just that today.

Be Watchful: Please be aware that our corn crop is being harvested. Please be watchful of farm machinery, wagons and equipment so they can operate and harvest safely.

For more information regarding corn or other vegetable corps, please contact your local University of Illinois Master Gardener, your Extension Office or visit your public library. 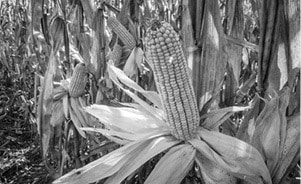 Corn: It Is Harvest Time