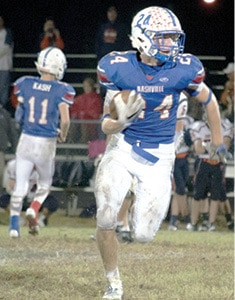 Ethan Reid takes the handoff and runs upfield during the Hornets 35-20 homecoming win over the Carterville Lions.

The Nashvillle Hornets celebrated homecoming with a 35-20 win over their conference rival Carterville. The Hornets took the lead early, and did not trail in the game. The win pushed the Hornets record to 4-2 and 2-1 in conference play. Nashville is back on the road next week as they travel to play the Pinckneyville Panthers, who are just 1-5 on the season.

The Hornets got off to a fast start in the game, as they took their first drive down the field for a touchdown. Nashville got two big third-down conversions on the drive, as Andrew Kash ran for a first down on third and five, and Grant Reed came up with a huge reception on third and twelve to set the Hornets up in the red zone. Kash would score the first touchdown of the game on a three yard run with 8:08 left in the first quarter.

After forcing a three-and-out from the Carterville offense, Nashville would get the ball back, and looked to extend their lead. After a big play from Kash to Ethan Reid went for 34 yards, Kash's next pass would be picked off giving the ball back to the Lions. Carterville would start their drive on their own eight yard line, and immediately gave the ball back ot the Hornets as Dylan Kwiatkowski recovered a fumble.

Nashville started their drive first and goal on the six yard line, and Reid would extend the Hornets lead with 5:10 left in the first quarter. An extra point by Colin Laws, would give Nashville an early 14-0 lead over the Lions.

The Lions would come back as time wound down in the first quarter. Carterville got a big play from quarterback Darien Miller , as he almost took the ball for a touchdown, but was tripped up by Neil Kachuba. The Hornets could not keep Carterville off the board as Brock Tuttle would score from 14 yards out. Carterville would convert the two-point conversion, cutting Nashville's lead to six points with 3:07 left in the first.

After the Hornets' drive stalled out, Carterville would get the ball back at the end of the first quarter. The Lions would strike quickly to tie the game, as Miller ran the ball in with 9:42 remaining in the first. Carterville would not convert the extra point, and the game stayed tied.

After drives from each team stalled out, the Hornets would get the ball back, but had a long way to go, as they started on their own six yard line. The Hornets would get a huge play from Grant Reed to escape from the shadow of their own goal line, into Carterville's territory. Nashville faced fourth and four from the Carterville 27 yard line, but were able to convert, as Kash found Cameron Parker for a first down. With 37.2 seconds remaining in the first half, Kash would find Reid for a touchdown to take a 21-14 lead.

The scoring wasn't over in the first half, as the Lions took the kickoff back for a touchdown, but miss the extra point. At halftime, the Hornets clung to a one point lead over Carterville.

The Hornets defense would step again on Carterville's first drive of the second half, as Reid would grab an interception, the second takeaway for the Hornets' defense. Nashville and Carterville would trade punts, before the Hornets got the ball back. Nashville got great field position on their next drive, as they started on the Carterville 35 yard line. Back-to-back carries from Reid set the ball up inside the ten yard line, and Reid would score his third touchdown of the game a few plays later from three yards out to give Nashville a 28-20 lead.

After a punt from Carterville, Nashville would get the ball back on their own 20 yard line. Nashville got the drive started with a huge 65 yard run from Andrew Kash to set the Hornets up deep in Carterville territory. A few plays later, Kash would find Arturo Garcia for a six yard touchdown. The catch, was the first touchdown reception of the season for Garcia, and extended Nashville's lead to 35-20.

Carterville would make one last drive to try and get back in the game, but the drive stalled out on Nashville's 12 yard line. From there, the Hornets were able to cruise to a 35-20 victory.

Nashville's coach Tim Kuhn, was happy with his team's play. "All three phases, other than the kickoff return, all three phases were pretty sound. I want to go look at some things, again there is gonna be a ton of things to correct, but I cannot say enough about the job my coaching staff did, kind of altered a couple things, and the kids did a great job of executing it. Total team effort.

After the game, Carterville coach Dennis Drust talked about his team's performance. "We fought back and battled back, and come out and don't execute in the second half. It all comes down to execution. I thought we had a chance there late, we missed a touchdown pass in the end zone, with still a chance to go. It's just a matter of Nashville wanted it more than we did tonight, the win was more important to Nashville than it was to the Carterville Lions."

Senior Ethan Reid also talked about his final homecoming game, "today at the pep rally, I said make tonight unforgettable, and I think we did a pretty good job of that. Incredible effort by everyone and came out with a win."

The Hornets defense also stepped up as they limited Miller to just 62 yards rushing after he finished with 238 last week against Anna-Jonesboro. Kwiatkowski finished iwth a fumble recovery, and Reid had an interception.