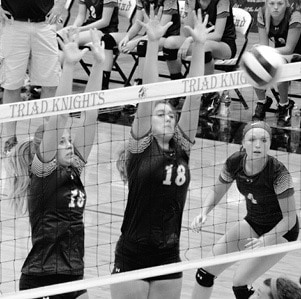 The Nashville Hornettes volleyball team capped off a busy week as they had seven matches, five of which came in the Triad Round Robin Tournament. The Hornettes got off to a good start, defeating Anna-Jonesboro, and DuQuoin, before losing four of five in the Triad Tournament. In the tournament the Hornettes defeated East St. Louis, but dropped matches to Triad, Glenwood, Collinsville, and Salem.

Jenna Harris and Janie Holle each had seven kills to lead Nashville in the win, followed by Abby Kempfer with six. Mackenzie McFeron and Paige Kasten each had five kills, and Bailey Melton had four kills. Defensively, Holle led Nashville with ten digs, followed by Abby Wesselmann with eight, Kasten with 7, and McFeron with six.

In their second matchup of the week, Nashville avenged an earlier loss to Anna-Jonesboro with a two-game win. The Hornettes won both games by a score of 25-19. In the first game, Nashville did not trail. Leading 8-7, the Hornettes dominated the rest of the game on their way to a 25-19 win. In the second game, the Hornettes trailed throughout, by as many as four, but came back to tie the game at 17, and outscored Anna-Jonesboro 8-2 the rest of the way.

The Hornettes began October at the Triad Round Robin Tournament. The Hornettes first game was against the host Lady Knights. In the first game, the Hornettes were dominated, as Triad would win easily 21-8. Nashville put up a fight in the second game, but Triad made a late run to win 21-17.

The Hornettes next match in the tournament was up against Collinsville. The Hornettes dropped the first game 22-20, before bouncing back for a 21-18 victory in game 2. that set up a match-deciding game three. In game three, which was only played to 15 points, Collinsville led the entire way on their way to a 15-10 win.

The Hornettes dropped their third match of the tournament against Glenwood in two straight games. Glenwood took the first game 21-15, before edging the Hornettes 21-19 in game two.

Nashville got their only win of the tournament, in their fourth match of the day agianst East St. Louis. Nashville won the match in two games. The Hornettes won the first game 21-16, before winning the second game 25-18.

Holle led the team with eight kills, followed by Kempfer with five. Wesselmannn and McFeron each ahd six service points in the win, while Harris led the team with 11 digs. Kasten finished with a team-high 14 assists.

In the final match of the tournament, the Hornettes dropped a close three game match to Salem. Salem took the first game 24-22, before Nashville bounced back for a 22-20 win in game 2. In the third game, Salem was able to take the match 15-9. McFeron led Nashville with seven kills, follwed by Holle with six. Kasten led the team in both services points and assists, with nine service points, and 17 asssists. Wesselmannn led the team with 17 digs.

Senior Janie Holle, and Junior Abby Kempfer both go up for a block during the Hornets first match of the Triad Round Robin Tournament on October 1.