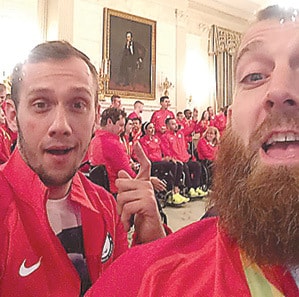 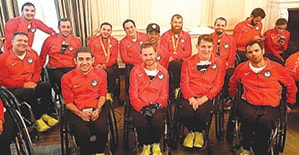 Chuck Melton of Richview, and Eric Newby, formerly of Nashville, now of Littleton Colorado, both earned Silver Medals as a part of the United States Wheelchair Rugby team that lost a thrilling gold medal match 59-58 to Australia in double overtime at the Rio Paralympic Finals on September 18.

Melton and Newby used to train together in Washington County as they both played for the St. Louis team before they joined Team USA. Melton joined Team USA in 2012, Newby joined him in 2013 after finishing college.

Although both Newby and Melton were happy to get silver medals at the Paralympic games, both expressed disappointment at not winning the gold medal. Melton said, “It was an amazing feeling, disappointment in not getting the gold because that is what we set out to do, but at the same time, it's an amazing accomplishment to come away with the silver medal in the Paralympic Games. So while you feel sad, at the same time there is a happiness as well.” Newby echoed Melton's sentiment saying, “at first when the game was over, it was kind of a whirlwind of emotions, because we had just lost the game, but just won a silver medal at the same time. It was a really strange feeling up on the podium. I remember just getting the silver medal, staring up into the crowd at my fiance, kind of upset, kind of happy. It wasn't until the next day, when I sat down and thought about how big of a deal it was.”

The gold medal game of the Paralympic Games in Rio is being called one of the greatest games in Wheelchair Rugby history. Neither USA or Australia could gain the advantage throughout the game.

Newby talked about how important the game was, “even though we lost the game, it was probably the best game in the history of wheelchair rugby, and it was on all of the big networks in the states, so it got great exposure for our sport, and it got great exposure for the Paralympics in general. So being a part of that is a great feeling, but still being 1.9 seconds away in double overtime, and losing by one point is one of the most frustrating feelings in the world.”

Including the loss in the gold medal game, Team USA is now 27-3 all-time in the Paralympic Games, and has been on the podium every Games since Wheelchair Rugby was added in 2000.

The United States bested their last performance in the London games, where they received a bronze medal. Overall Team USA has two golds, two bronzes, and a silver in Paralympic competition.

After the games were over, Melton and Newby were able to spend a little bit of time at home before heading to Washington D.C. Newby talked about leaving again, after just getting home, “tt was cool, I was excited to do it, but at the same time it was like I just got home. I was still tired. I just got back into the swing of things at work. So I almost kind of didn't want to do it, and then when I got there and it all kind of set in on what we were doing, it was a cool, cool thing.”

While in Washington D.C the athletes went to the Team USA awards with both the Olympic and Paralympic athletes, and received their Olympic rings for going to the games. Newby said of his ring, “I've never been a guy to wear a ring, but I'm sure I'll wear that one every once in a while.”

The next day, the athletes went to the White House, where the athletes met President Obama, the First Lady, and the Vice President. Newby talked about his experience, “it didn't really set in, until we were there going through security, that I was like ok, I'm at the White House, this is crazy. Then we went on a tour before lining up to meet the President. Right when I saw him through the doorway, I was like holy cow, this is happening, and it was just crazy. I kind of froze up and didn't know what to say to him, but once I got past him, I kind of loosened up. I gave Michelle Obama a big hug. And then he spoke to all the athletes in a private room. It was aired on tv, but it still felt like a really personal conversation with him, and its probably one of the coolest experiences of my life.” Melton also talked about the trip, “ I was really looking forward to it. It was a really neat trip. We didn't get to see as much of the white house as I was hoping, just because it was such a large event with all of the athletes there, and it was raining on top of it, so everything outside had to get moved inside, but just meeting the President, the First Lady, and the Vice President was something I'll never forget.”

As for the future for both Melton and Newby, Melton would like to continue saying “as long as my body holds up, and things are good with the family, if everything falls in place, I plan on continuing on. Just have to take it one step at a time. I'm taking some time off now, playing St. Louis ball, and taking it easy for a little bit, and then the tryouts for next year's US team are in January.” Newby was undecided saying “I don't know right now. Part of me wants to, but the other part of me, my body is pretty beat up, torn up. I've been playing for ten years now. I'm still on the fence about it. I don't really have to make a decision until like January, so I'm kind of waiting it out. I just don't know. I'm on the fence about it.”

The next major competition for Team USA is the World Championships in Sydney in 2018, before the 2020 Paralympic Games in Tokyo.