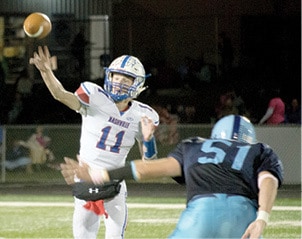 The Nashville Hornets football team certainly has a flair for the dramatic thus far this season. The season started with an incredible comeback in the first game of the season, as the Hornets scored 23 unanswered points to defeat Carlyle. The dramatic season for Nashville continued this past Friday, as they overcame a 21 point halftime deficit, to defeat conference
rival Pinckneyville 36-35 in double overtime. The win moved the Hornets to 5-2 on the season. Nashville needs one win in their final two games to clinch a spot in the playoffs.

The Panthers got off to a fast start, as they capitalized on good field position and mistakes by the Hornets to take a 21-0 lead in the first half. The Panthers first drive of the game, started in Nashville territory on the 48 yard line. The Panthers would soon cap off an eleven play drive with a touchdown run from quarterback Brian Kling. An extra point from Dylan Carns gave Pinckneyville a 7-0 lead.

Nashville got the ball to start the second half, and almost matched their entire offensive production from the first half, on the first drive of the second half, which went 82 yards for a touchdwon. The drive was highlighted by a 34 yard run from Arturo Garcia, a fourth down conversion by Andrew Kash, and was capped off on a 16 yard touchdown reception by Ethan Reid.

Nashville would immediately get the ball back, as sophomore Colin Laws executed an onside kick to put Nashville's offense back on the field. The Hornets capitalized on two penalties by the Panthers, on their way to their second touchdown of the game. Neil Kachuba hauled in a pass from Kash for 11 yards to cut Pinckneyville's lead to seven points.

After the Panthers got a huge 30 yard play on a reception by Lucas Downard, to set the Panthers up at midfield, Nashville's defense stepped up with a fumble recovery by Lachuba to give the Hornets a chance to tie the game. The Hornets did just that on their next drive. Highlighted by two third down conversions, Reid would cap off the drive with a seven yard touchdown to tie the game.

The fourth quarter saw each team turn the ball over on downs in opponent's terriotry. Pinckneyville had a fourth down run stuffed by Derek Kirgan and Dylan Kwiatkowski at Nashville's 45 yard line. But Pinkneyville's defense would step up on Nashville's next drive, as the Panthers stopped Nashville three times inside the five yard line to keep the game tied. Pinckneyville would have one more opportunity in regulation, but a hail mary fell incomplete in the end zone.

The teams would go to overtime, in which each team would get the ball at the ten yard line and attempt to score. The Hornets had the ball first and Reid scored on the first play to give Nashville the lead. Laws added the extra point to put Nashville up 28-21. Pinckneyville would get the ball next, and on third and goal from the four yard line, Alex Howard ran the ball in for a touchdown. After a false start pushed Pinckneyville back, Carns added the extra point to tie the game at 28.

In the second overtime, Pinckneyville got the ball first, again from the 10 yard line, and Chase Fullerton ran the ball in on third down from three yards out. Carns again would add the extra point ot give Pinckneyville a 35-28 lead. Nashville would get a chance needing to score. The Hornets could not get in the end zone on first or second down, but on third down, Kash would find Reid in the end zone for the score. Down by one, coach Tim Kuhn made a gutsy call to go for two and the win. On the two-point conversion, Kash would find Reid again for the win.

After the game, Coach Kuhn talked about halftime, “we just talked, we'd been here before and we've got more time. We've done, we were down by 20 with eight and came back to win. We've got 24 minutes. Lets see what we can do. The great thing, we had the opening possession coming out, and we did a great job of going down and getting those points.” Kuhn said of the onside kick, “we were still down two scores, let's roll the dice. Special teams dialed it up, and tenth grade kicker did a great job and Alec Johns did a great job recovering the ball, and the momentum was swung.”

Pinckneyville dominated on the ground in the game, as they outgained Nashville 322-161. Overall Pinckneyville held the advantage in total yardage 352-325. The Hornets were led by Reid, who finished the game with four touchdowns, two receiving and two rushing. Overall Reid gained 47 yards on the ground, and finished with 11 catches for 97 yards. The 11 receptions, broke the school record for receptions in a single season, and built on his school record for career receptions.

Kash finished 19-26 in the game through the air for 164 yards and three touchdowns. The 164 yards passing for Kash allowed him to break the all-time career passing yardage record, as he passed Brady Harre who had 2,560 yards in a Nashville uniform. Kash also had 69 yards on the ground to lead the Hornets.

Grant Reed finished with six yards on three carries, while Arturo Garcia rushed for 33 yards before leaving the game with an injury. Cameron Parker had five catches in the win for 43 yards, while Kachuba had a 12 yard touchdown catch for Nashville.

Next week, the Hornets have their last home game of the season, as they take on DuQuoin. The Indians are 5-2 on the season, and have a perfect 4-0 record in conference play.

Senior Andrew Kash lets go of a pass during the Hornets thrilling double overtime win over Pinckneyville on Friday October 7.