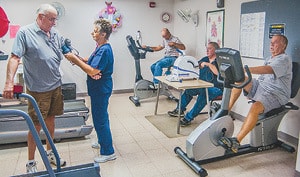 There’s music playing. People are moving their bodies and getting a good, solid workout in. Despite the sweat, these folks look like they’re even having fun– which is even stranger when you take into account the fact that these people working out aren’t at the gym, but rather, at Washington County Hospital.

It’s a Friday morning, and while this is at the hospital, it’s not a doctor’s appointment, it’s a cardiac rehabilitation session. It’s all men on this particular day, but there are many women that take part in the sessions too.

The conditions that brought these patients here might have been very serious – heart attacks, bypass surgeries, close calls and near misses– they have a good attitude about doing the program. While they do work hard, you can’t– or won’t– keep doing something like this day after day, week after week, and even year after year, if it isn’t at least some fun too.

A common thread that Habbe and the others present have is that these workouts, this rehab, is not just helping them to get back to where they were before, but is also helping them to insure and even better future for themselves.

“I think it’s everything. It’s mind, body, health, everything,” Habbe said. “I wouldn’t be here today if it weren’t for this.”

What brings this program together for the participants isn’t just the exercise, or the camaraderie, but the supervision as well. Heading up the cardiac rehab sessions is Dorian Sabatini, RN. In any exercise program, pushing yourself, doing things that are more difficult than what you might have done the session before, is important. It’s also something that can be daunting if you’re worried about your ticker giving you trouble.

What Sabatini provides is both medical oversight and gentle-but-firm motivation (how gentle it is probably depends on who you ask and how that week’s workouts went for them though).

“Some times you don’t feel like getting your heart up to 118…taking it easy,” said Charlie Rusiewski, participating in the program since 2009. If it’s a taking it easy type of day, Dorian, “will kind of raise her eyebrows and want to know why.”

“She makes us work some times, even when we don’t want to,” said Tom Schroeder, who has been coming to cardiac rehab since June of 2006, one of the people who has been attending the longest.

In addition to pushing the participants to do better, Sabatini may also make the call to not let them exercise.

“Many of us, we’ve been sent to the doctor straight out of here,” Rusiewski said.

“If you’re not up to par, you don’t get to exercise,” Habbe added.

In a given session, those participating will weigh in, then get blood pressure, pulse and blood-oxygen readings taken. After that, Sabatini puts three patches on each person’s chest, which connect to a little box that transmits their cardiac information to her computer. Four people can do a session at once because she can monitor four people at once.

After all of the baseline readings are taken, the session begins with warmup exercises: stretches, arm and leg exercises, and chair sit-ups. Then, each of the people present hops onto a bike, a treadmill or the handwheel and begins their aerobic workout, which lasts about 40 minutes with Sabatini checking pulse, blood pressure and blood-oxygen every five minutes or so. The session ends with cooldown exercises, and then more readings.

While heart health is the stated intent of the program, overall health and establishing healthy habits are very welcome side effects.

“It just makes you feel better,” said Bill Purcell. He started in 2013, went back to work, but lately, says he’s been coming back for the last few weeks.

“Oh yeah, yeah. I’m in a lot better shape,” said Fred Reid, who says that he’s been coming for four or five months.

Bob Jack started on August 1, following a heart attack in May.

“Luckily, I didn’t have any heart damage, so I’m getting through it pretty good,” Jack said. In just that relatively short amount of time, Jack said that he has already seen improvement, adding that Sabatini’s monitoring made him feel safe enough to push himself.

“Everyone has an individual goal,” said Sabatini. “Sometimes, we’ll change it or modify it, sometimes they’ll need a little push. But they work.”

Phase I is one session per week, Phase II, after their health improves some and can they can tolerate the exercise better is twice a week. Finally, Phase III is maintenance, and is up to the people doing it and their general fitness and time availability. Much more than twice a week though, and it wears them down, Sabatini said.

People can come in with a doctor’s order, and it can be a doctor from anywhere, Centralia, Mt. Vernon, Belleville or St. Louis, wherever.

“Once I get their order from the doctor, I design their program for them,” Sabatini said.

That’s part of the reason behind the music– polka during this Friday session, often 60’s rock like the Beatles on Wednesday mornings, and it can change depending on the group present.

The other reason for it is that, “I notice that it increases their stamina,” Sabatini added. “Their numbers are better with it on.”

The fun isn’t just the music either. “I do have seasonal parties,” Sabatini said.

“I come for the free donuts,” joked Butch Malawy, who has been taking part in the program for two years now.

One last thing though…

What kind of insurance pays for going to cardiac rehab for two, seven, or even ten years, like some of those taking part have been?

There is no kind.

Once a patient gets to Stage III, insurance is done. These long-time members of the class pay for it out of their own pockets, which is probably an even more substantial endorsement than all of the many accolades the participants had for the program. It does these people enough good that they spend their own money to keep at it.

Then again, it’s money well spent. How can you put a price on good health?