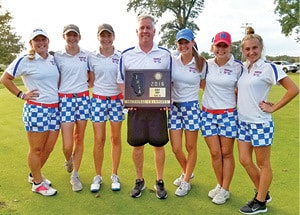 The Hornettes easily won the Regional, defeating second place Waterloo by 16 strokes, and third place Pinckneyville by 19 strokes. Hope Rueter led the way for Nashville finishing with a 78, which was the second best round of the Regional. Rachael Kell finished with an 85, followed by Jill Guetersloh with an 88, Sarah Gutersloh with an 89, Brooke Bartling with a 91, and Jordan Stiegman with a 92. The Hornettes finished with each of their scores in the top ten scores overall in the Regional.

In the Sectional, the Hornettes defeated eleven other teams, and finished 14 strokes ahead of the field advancing to state as a team for the first time since 2013. Leading the way for Nashville was Rueter, who just missed out on being the top overall finisher by one stroke. Rueter finished with a 77 on the day. Jill Guetersloh was second on the team with an 83, followed by Kell with an 84. Sara Guetersloh finished with an 88 on the course, to finish fourth on the Hornettes. Bartling shot a 94, and Stiegman shot a 96.

The Hornettes will now look for their second state championship, and fourth top four finish in state since 2010. The State Final Tournament will be held at Red Tail Run Golf Course in Decatur on October 14 and 15.

The Hornettes last trip to state as a team, ended in a State Championship in 2013.