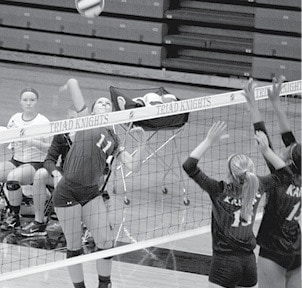 The up and down season for the Nashville Hornettes volleyball team continued as they split two Southern Illinois River to River Mississippi Division matchups on the road. The Hornettes won a hard fought three game match against Sparta on October 4, before dropping a three game match to Carterville on October 6. The Hornettes record stands at 10-16 and 4-4 in conference play. The Hornettes continue their push towards Regionals this week, as they travel to DuQuoin on Thursday, and play in the Monster Mash Tournament in Freeburg on Saturday.

On October 4, the Hornettes played their first of two road games this week against Sparta. The Hornettes got off to a fast start as they were able to take the first game 25-17. Sparta battled back in game 2, and took the game 25-15. The Hornettes would be able to bounce back in game three, to win the match 25-20. Nashville was led by Jenna Harris, who led the team with 11 kilss, and tied with Mackenzie McFeron for the team lead with 12 digs. Abby Kempfer added nine kills followed by Janie Holle with eight. Paige Kasten led Nashville with an incredible 44 assists in the win.

The Hornettes were back on the road two days later to face Carterville. The Hornettes had previously beat Carterville this season, but the Lions were able to get revenge as they took the win in the three game match. In the match, Nashville bounced back from a 25-22 loss in game 1, to take the second game 25-21. In the third game, Carterville would seal the win with a 25-22 victory. McFeron led Nashville in the loss with 12 kills, followed by Holle with five. Abby Wesselmann led Nashville with 10 digs, and finished with eight service points, which tied for the team lead with McFeron. Bailey Melton and Kempfer each had two blocks to lead Nashville in the loss, and Kasten finished with 19 assists.

Vanessa Wyciskalla tries to drive down a spike past Collinsville defendeers during the Hornettes loss to Collinsville in the Triad Round Robin Tournament.